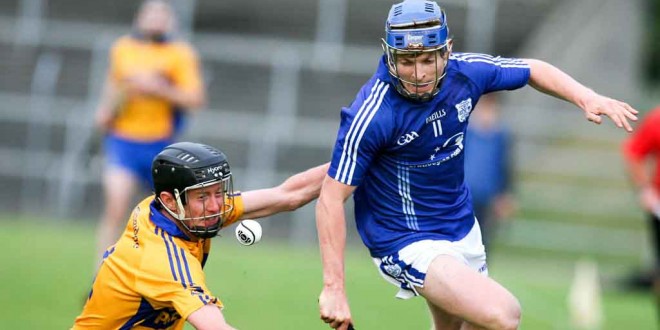 Cratloe's Podge Collins in action against Tadhg Keogh of Sixmilebridge in the Clare championship.

Cratloe’s only previous involvement in the Munster campaign was in 2009 when, ironically, they came up against Ballygunner in the opening round. That game was also played at Walsh Park, where the Waterford champions recorded a two-point win, 1-14 to 0-15.

Balluygunner manager Fergal Hartley played at centre-back in that tie. Amonst the players who lined out for the Waterford champions that day, and who will be in the side on Sunday, are goalkeeper Stephen O’Keeffe, Philip and Pauric O’Mahoney, Wayne and JJ Hutchinson, Shane and Brian O’Sullivan and Shane Walsh.

Over the years, Clare teams have found it difficult to win at Walsh Park and there is little doubt but that Cratloe will face a stern test on Sunday. It took the Clare champions a while to get going last weekend against a Feakle side that showed they will not be out of place in senior competition in 2015. Cratloe managed the win with a strong finish, the experience of Conor Ryan, Liam Markham and Conor McGrath helping them over the line.

The South-East Clare side went into the league semi-final with four changes in personnel from the county final. Shane O’Leary, Sean Chaplin, Enda Boyce and Óige Murphy were replaced by John O’Gorman, Barry Duggan, Philip Gleeson and David Collins.

The team for Sunday’s game won’t be named until nearer match time but it is likely to be along the lines of that which faced Crusheen in the county final.

Fergal Hartley may be relatively new to management but he is no stranger to Munster club hurling, having played in four campaigns and contested three championship finals, featuring on the winning team in 2001. He has pointed to “the quality in Cratloe” when referring to All-Star players Conor Ryan, Podge Collins and Conor McGrath. It must be noted, however, that Ballygunner have half a dozen players with inter-county experience in Pauric and Philip O’Mahoney, Shane O’Sullivan (the O’Mahoney brothers are his nephews), goalkeeper Stephen O’Keeffe and the Hutchinson brothers, JJ and Wayne.

It’s a very difficult task for Cratloe but there is no doubt that, on form, they have the ability to win the game. They haven’t had a break for almost three months, with either a hurling or football championship game every weekend, not taking into consideration their games in the junior B and U-21 football competitions.

Questions were asked last weekend by Feakle and the Cratloe side provided the answers in the vital final quarter. More questions are sure to be asked this week but Cratloe should be able to provide the answers and book a home date against the Tipperary champions in the semi-final on November 9.