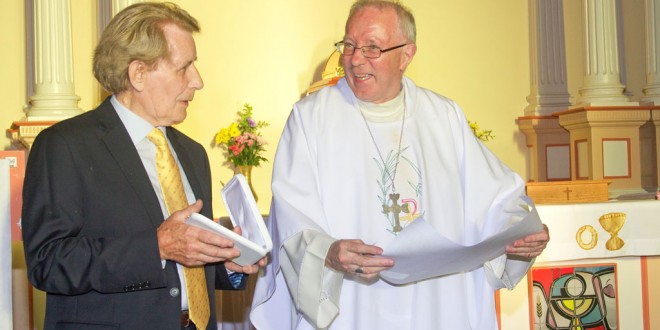 A well-known local activist and primary school principal was presented with a Benemerenti papal award recently.

As a teaching principal at Ballinakill National School, the promotion of the Catholic ethos was first and foremost in Martin Fahy’s vision for the school.

However, the leadership role Mr Fahy played on several committees in the parish such as pastoral councils, school committees and hall committees resulted in official recognition in the form of this prestigious medal.

His son, Ger, is musical director for Michael Flatley, while his daughter, Mairin, plays with the internationally renowned Chieftains. Both are involved in the staging of Trad on the Prom in Salthill each year.

Although Mr Fahy is a native of the neighbouring parish of Kilnadema, he has made a major contribution to the social, educational and spiritual development of the people of the parish of Derrybrien/Ballinakill since he came to live there more than five decades ago.

During his long stints of community work,  he was responsible for church choirs, altar-server training and training children to read at mass.  Today, he is still a Eucharistic Minister in the church, a position he has had for well in excess of 20 years. He still reads in the church occasionally, most notably when he proclaims the Passion every Good Friday.

Deeply religious, he has an enormous love for the Eucharist, the role of  the priest and church that he has served all his life.
A life-long Irish language activist, this fluent Irish speaker has involved himself in the development of the oral tradition since the middle of the last century, having written books suited to primary and secondary syllabii.

His keen love of Irish traditional music and drama has seen his students perform at functions throughout Ireland and England. His involvement in the local wren boys, scór and Pioneer Abstenice Association is indicative of his unstinting passion and dedication to his local community.

In his homily on the occasion of his presentation of the award, Bishop John Kirby said he became aware of Mr Fahy’s enthusiasm for the Irish language and traditional music on his first visit to Ballinakill National School in his early years as bishop.

“We can see Martin’s interest and enthusiasm to carry this onto the next generation.

“But it is not for music or his Gaeilge that Pope Francis has agreed to this medal but to Martin’s rootedness and commitment to the parish of Ballinakill, to the Church, to Clonfert Diocese and to the Catholic community worldwide,” he said.

Ballinakill PP, Fr Pat Conroy and Bishop John Kirby concelebrated mass in St Joseph’s Church, Ballinakill recently to mark this auspicious occasion, while the Fahy family presented a chalice and a ceborium to the church.

Family and friends were present to witness Bishop Kirby present the scroll and insignia to  Mr Fahy.
The Benemerenti medal is conferred on those who have exhibited long and exceptional service to the Catholic Church, their families and community.

After mass, the celebrations continued in the hall where the community spirit was evident with refreshments, music, dancing, song and jubilation prevailed.