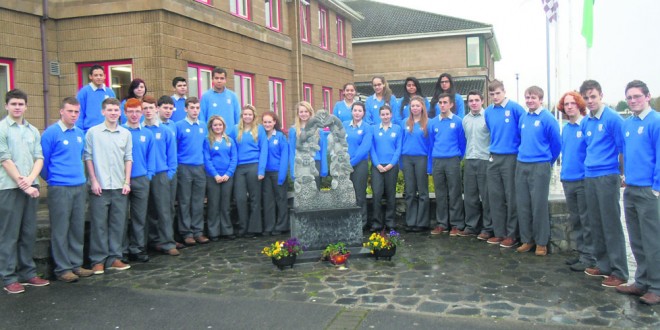 Commemorations have taken place all over Europe this year, marking the centenary of the beginning of World War I.

The Great War raged for more than four years, ending on November 11, 1918. On Tuesday, the anniversary of Armistice Day, Irish soldiers were remembered in South Galway.

Commemorative badges, manufactured and designed by students in Gort Community School, were distributed at a ceremony of remembrance, as students and staff recalled the forgotten Irish volunteers.

Young people in fourth year conducted a project with the goal of remembering the 150,000 Irish who fought in the war. Their project was cross-curricular taking in a number of subjects and departments.

“As part of the project, they looked for a symbol to represent the volunteers but the only symbol they came across was the poppy. Many of the class were unhappy to use the poppy, as they felt they wanted to have something original that would remember just the Irish,” explained history teacher and project co-ordinator, Pat Conole.

“Many of the 150,000 Irish volunteers were fighting due to poverty and many of them were underage. Many of them were ostracised upon their return. They found it hard to start new businesses, as they were boycotted and were unable to find work, as they were discriminated against for their involvement in the war,” he continued.

The students came up with ideas for what symbols they would like to use and developed several images to convey the message of remembrance.
Their final design features the four provinces of Ireland, because men from all over the island volunteered. The symbol features a dove to show peace and two hands also form part of the design, to show support for those who have lost family and friends to war. Finally, they used the word ‘Reverentia’ to show respect to the many volunteers.

Six hundred of the commemorative badges were made and distributed in the school. It involved co-operation between the art, history, music, engineering, English and international students departments. The project emerged as a result of One World and the school received a small grant from the National Youth Council.

According to Mr Conole, students now hope to gather and document local links to the First World War. Anyone who has information on local men who took part in the war is asked to contact the school to help them with this.