Home » News » Back to school for President Higgins 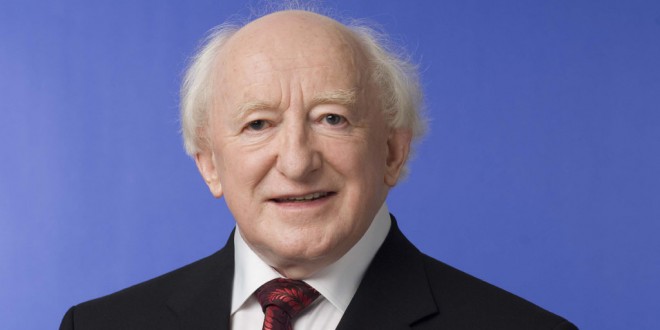 Back to school for President Higgins

President Michael D Higgins turned back the clock  this Friday when he visited his Alma Mater, St Flannan’s College in Ennis.

The President was welcomed by college president, Fr Joe McMahon and principal, Carmel Honan and following a tour of the school, addressed students.

President Higgins, in thanking Fr McMahon and Ms Honan for their invitation, he also thanked Richard Esedebe, a third-year student, who initiated the visit, by asking him to present tthe Gaelbhratach award last year.

In his address, he said, “It is a great pleasure to revisit a place which has played such a significant role in my life. It was here that, like you, I spent some of my formative years, learning not just that which was laid out in the school curriculum, but so many other important life skills such as the value of friendship and loyalty and teamwork and the importance of reaching one’s full potential.

“My teachers and fellow pupils, and the overall ethos of this school, helped to shape my belief in the necessity of social justice and taught me about compassion and the power of possibility even in difficult times. St Flannan’s is a place that holds many memories for me; memories that have survived over the decades since I studied within these walls; memories as permanent and lasting as the names that have been carved in the old clock tower by generations of St Flannan’s pupils.

“It is uplifting to  know that St Flannan’s continues to be guided and inspired by the tradition on which it was founded, a tradition beautifully summed up in this school’s mission to help its students “discover and develop personal talents and resources and to set themselves high standards of achievement and behaviour.” It is a mission which tells me that, at its very heart, St Flannan’s College is still the same place that I, and many former pupils, remember with fondness and gratitude.

“There can be no doubt, of course, that new and excellent facilities have contributed to the capacity for learning and development among students in St Flannan’s. Indeed, I was pleased to learn that while the pursuit of high standards remains a core objective here, such excellence is not narrowly defined, or limited to academic achievement and exam success only, but also embraces the maximisation of students’ development in co-curricular areas.

“Even more inspiring, however, is the philanthropical and humanitarian values which are part of the ethos of this school, strongly embodied in the social immersion programme which sees students visit and work with the homeless on the streets of Calcutta every Easter.

“When you come back to your old school it can, at first, seem to be greatly changed from the school you were a part of many years ago; your teachers and friends long gone, the rooms often altered beyond recognition. Today St Flannan’s is a multi-cultural, co-educational school which has progressed and developed significantly as it continues to play a central role in the life of the citizens of Ennis and its environs.

“The whiteboards, the modern sports facilities, the laboratories, and even part of the building itself did not exist in my day. But revisiting your old school makes you realise that the four walls and the classrooms that once circumscribed your world are just a very small part of the overall experience; and that it is the ethos and spirit of the school that really defines your schooldays and the lasting impact they make on your life. If that ethos remains strong and central to the school, then the school remains unchanged.”

In the afternoon, he heads to Rockmount National School, Miltown Malbay where he will view an exhibition of photographs depicting the history of the school over the past 150 years.

President Higgins will be presented with a book, Stepping Stones, which comprises a collection of recipes and words of wisdom compiled by the children, as part of their project for the Junior Entrepreneur programme.
Following a traditional music recital, there will be an opportunity for those gathered to meet and mingle with the President.

Later, the cultural dimension of County Clare will be seen by President Higgins when he visits The Burren Centre, Kilfenora to offficially open the Kilfenora Céilí Band Parlour Exhibition.

Previous Comment: A mess of Clare’s own making
Next Vital tie for Clare in Nowlan Park