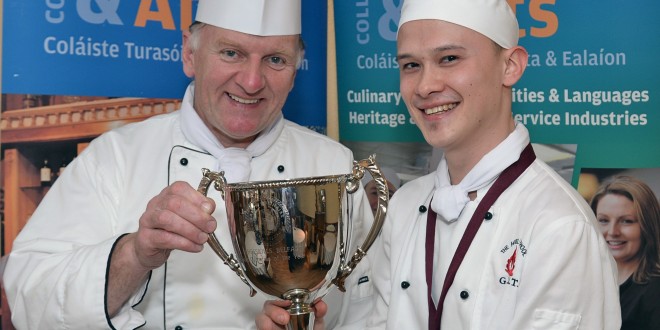 Patrick Phillips (right), was selected Student Culinarian of the Year at the IFEX competition.

A 22 year old Cooraclare man, who is a student chef at Galway Mayo Institute of Technology (GMIT) has won the Student Culinarian of the Year award at the IFEX culinary competition in Belfast.

Patrick Phillips, who is in his first year of a Higher Certificate in Culinary Arts in GMIT’s Galway campus, is also employed part-time at Aniar, Galway’s only Michelin Star restaurant.

He won the accolade for his starter of goats cheese parfait, main course of pan-fried monkfish and dessert of baked apple.

Speaking to The Clare Champion this week, Patrick cited his mother, Emyh, as a major influence in his chosen profession.

“It started with my mam, who is from the Philippines, where food is a big part of their culture. I grew up in the kitchen watching her cook. Then in my teens I started watching cookery programmes and I got inspired by the likes of Gordon Ramsey and Heston Blumenthal. I started experimenting in the kitchen myself then,” he explained.

“I did a three year architectural course in UL originally but then I said it wasn’t making me happy anymore and I should do what I love. I said ‘I’m going to pursue food.’ So two and a half years ago I did a catering course in the National Learning Network in Limerick. From there I applied to GMIT and I got a place thankfully. Everything kind of blossomed from there,” he added.

Although not keen to dwell on it, Patrick’s achievements are all the more noteworthy as he works with one hand, due to a congenital birth defect in his left arm.

“Just meeting new people in general you will get a second look of ‘is this fella going to manage?’ But after a while they see me cooking and it’s not a bother. They are used to it now,” Patrick noted.

Long term the Cooraclare man plans to run his own restaurant.

“My ultimate aim is to have my own place maybe in ten years time hopefully in Clare. I’d like to work to the standard of Michelin because I think the food that’s being produced at that level is phenomenal,” he said.

He is not ruling out the possibility of operating a Michelin Star restaurant in west Clare come 2024 or thereabouts.

“At home we just want a nice good feed, for good value and we’re happy. They don’t want to fork out €60 or €70 for a five course meal. Nobody is going to do that at the minute. But if you look at England there are a lot of Michelin Star restaurants located in rural areas and they’re thriving because of the food that they’re doing. It might be a risk at the minute but I think that in time, the customers might come,” the award winning student chef speculated.

Aniar is owned by JP McMahon and the Head Chef is Ultan Cooke. Patrick has learned that Michelin Star chefs must be calm and focused.

“The sign of a good chef is somebody who is organised, calm and does not have to shout. Especially at Michelin Star level it’s great to see that because I was worried going in there at the start. I hadn’t experienced a Michelin kitchen before. But if you do make a mistake you just tell the chef and we rectify it and move on,” he explained.

West Clare native Peter O'Connell has worked for The Clare Champion for 12 years and covers everything from sport, especially GAA, news, features and has been even known to branch into the fashion scene on occasion.
@@westclarepage
Previous Podge delivers crucial 35 minutes for Clare
Next Another award for renowed Killaloe accordion player