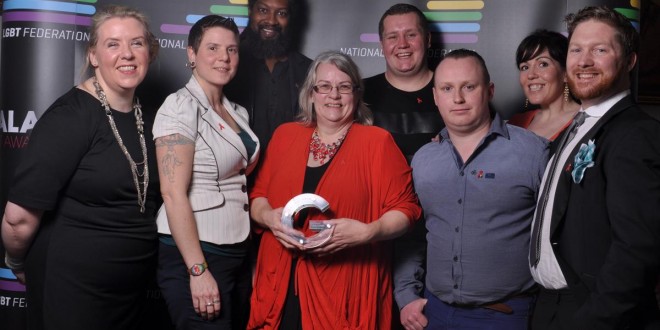 THE Red Ribbon Project, a Mid West based organisation working within the area of HIV/AIDS, hepatitis B and C, sexual health & LGBT, has won the Noel Walsh HIV Campaigner of the Year Award.

The Red Ribbon Project has been involved in HIV activism since it was first set up in 1989 by a group of gay men in Limerick and is currently promoting ‘Everyone has an HIV status – do you know yours?’ by providing rapid HIV testing in the community.
The group was honoured for its work at the 2014 GALAs – Gay & Lesbian Awards over the weekend.

The GALAS were created in 2009 by The National Lesbian and Gay Federation (NLGF) to honour those who work towards a better future for LGBT people in Ireland. “They are here to encourage and reward those LGBT people who give of themselves for the greater good of their community, to show them that their efforts do not go unsung, and that they are an incredible resource which we all value beyond measure,” according to a spokesperson.

The awards also celebrate people in public life who have committed themselves to equality and positive representation for LGBT people. Leaders, whether they be in politics or the media, who give a message of diversity and equality are of great importance to lesbian, gay, bisexual and transgender people. They influence Ireland for the greater good and move our society towards a more inclusive and equal state.

Ann Mason, Manager of Red Ribbon Project said she was very honoured to receive the Noel Walsh HIV activism GALA award in recognition of their work in this area.

“Red Ribbon Project worked closely with Noel before his untimely death in 2008, and we are proud to continue the important anti-stigma work he started.

The GALAS also celebrate the rich and innovative culture, honoring the entertainers, artists, writers, and events that go into making gay Ireland a vibrant and exciting place to be. The awards celebrate entertainers and broadcasters in the public eye who are happy to be out and proud, giving a message of hope and inclusiveness to everyone watching,” the spokeperson added.

Campaign to get tested for HIV