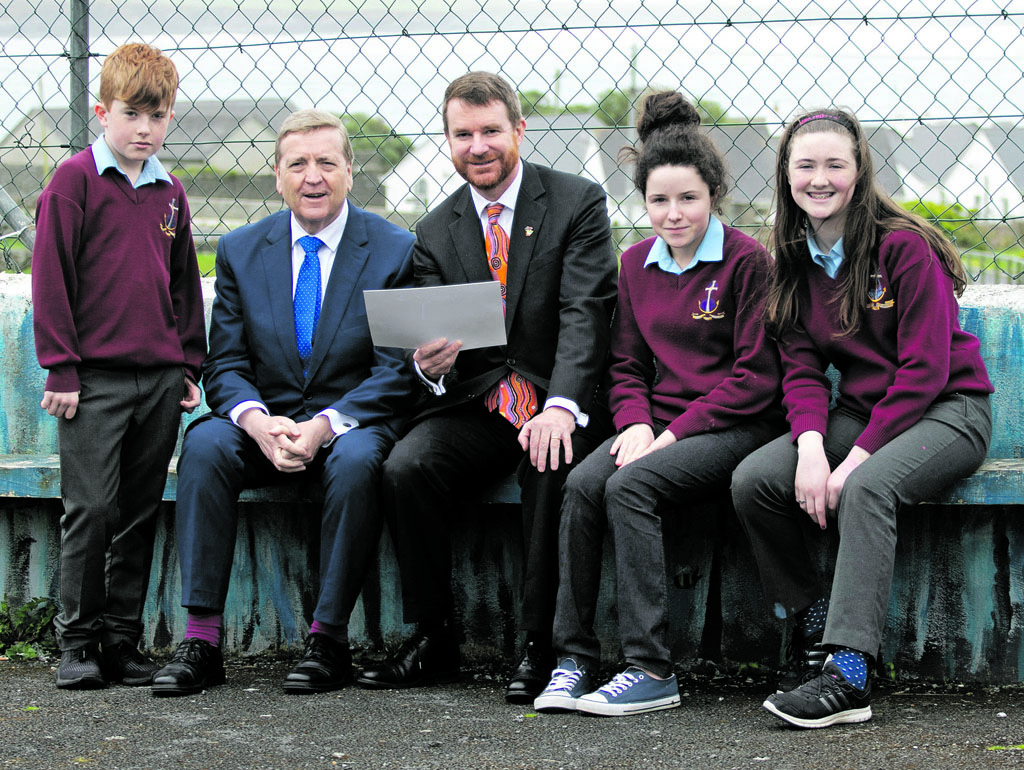 THE Australian Ambassador to Ireland, Kevin Andrews, visited St Joseph’s Secondary School in Spanish Point last week, at part of his day-long visit to the county.

Originally from Canberra, which is the administrative capital of Australia, Mr Andrews has visited the county a few times prior to this trip, in a private capacity.

“I’ve been here a couple of times on holidays and I came down for the Fleadh Cheoil last year. I have an interest in music generally and, as a whim, I decided it would be a good idea to learn how to play the uileann pipes when I came to Ireland. I’m not sure that I’ll inflict my skills on you at this stage,” he laughed.

The ambassador has worked for 30 years in the Australian public service and has served for just under two years in his current role.

He visited Spanish Point due to the area’s connection with a local man, who made the Clare Valley in Australia his home.

“There was a guy from Clare who went to Clare Valley, Edward ‘Paddy’ Gleeson. Early in the 19th century, he went over and became a big land holder. He was known as the King of Clare. Every couple of years, we have a couple of kids who come over from Clare Valley High School in South Australia. They have a great time here in Spanish Point.

“I was talking to some people at the school and they love the fact that the Australian kids come here and settle in. Again, there is that similarity and world-view. They settle in, make friendships and find that it’s a great experience, both for the kids who are coming and for the kids at the school here,” Ambassador Andrews told The Clare Champion.

He feels that with Brexit looming, Ireland and Australia have an opportunity to upgrade their commercial and trade links.

“We are going out to Clipex in Ennis this afternoon. That’s a really good story. It epitomises what I think are some of the good opportunities between Ireland and Australia, particularly if we can get an Australia-EU free trade agreement negotiated. That will open up the possibility of companies coming from Australia and using Ireland as a base, not only for selling and employing people here, but also for selling Australian products into the EU.

“Likewise for Irish companies, who need to broaden their markets beyond Britain, they can use Australia as a trusted base for doing that. It’s the small and medium-sized enterprises that can most benefit. The fact that we speak the same language, have a similar legal system and a lot of trust between our people, it makes it a much more comfortable place for a small company to try and go in to,” he feels.

Of course, there is no avoiding the reality that Ireland is quite a distance from Australia. However, Ambassador Andrews points out that the cultural links are very strong.

“It’s an incredible thing for Australians coming to Ireland. It is a very long way away and we always find that European people think it’s further to go to Australia than we find it to come over here for some reason. While it is a long way physically, psychologically we’re incredibly close. I think that’s because so many Irish people, over the years, have migrated to Australia and made it their home and made an incredible contribution to turning Australia into the country it is today.

“Irish people have made contributions to democracy, the legal system, business and sport. The love of sport is something that brings us very close together. We have rugby but in both countries we have our own indigenous sports in Australian Rules and GAA. Gaelic football is quite similar in many of its rules, so we can play each other and I think, in both countries, it’s the indigenous sport that really tugs at the heart strings of people,” he said.

Ambassador Andrews loves his sport. How could it be any other way?

“I’m Australian so I must be into sport. I was brought up in the southern part of Australia where it is generally Australian Rules that gets the pulse going.”