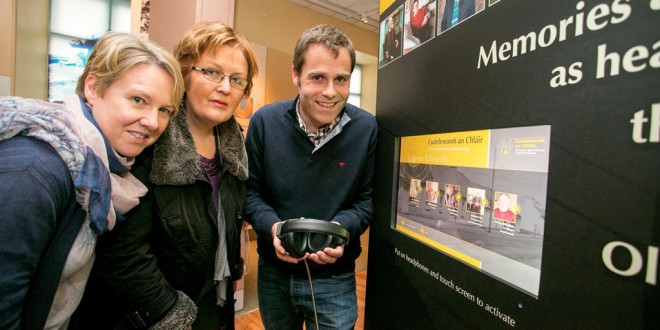 Cormac McCarthy of the group said visitors can view footage of people talking about times gone by and explained the installation of the audio walls is part of their work to increase access to oral history.

“We were fortunate enough to get funding from Clare Local Development Company. The last bit of funding that we had we put towards the development of these interactive audio-visual displays. A core part of what the group is about is recording the oral history and also trying to get it back out there into the community. This is a project we devised that would get it out there into the public and the locations that we’ve chosen have among the highest footfalls in the county,” said Cormac.

The interactive audio-visual displays will showcase 55 clips from the massive Cuimhneamh an Chláir archive and the bespoke units are around 7ft x 4ft in size.

He said there is a good range of material and that the group is pleased to get people’s stories out.

“It’s only a small fraction of what we have in our archive but there are 55 individual clips, representative of both male and female, from across the entire county and we have that subdivided into eight categories. The clips range from between approximately a minute and three to four minutes.

“It’s a nice thank you to the people who were generous enough to invite us into their homes and give us their memories. It’s back out there for them and their family and friends.”

Many areas of life are touched on in the clips, he added. “There are eight separate categories, human life, continuity and change, there’s a great one on childhood memories. Michael O’Gorman talks about how he was brought into the world, which is very interesting and another person recounts their first day in national school. There’s a section on folk belief and the supernatural; we have the late Sean O’Halloran from Kilfenora with some fantastic stories. There is a really broad spectrum of stuff there.

“In a section on entertainment and pastimes, they talk about dancehalls. There’s a really diverse range of topics and, to be honest, we could have added even more to them but we had to have a finite amount on the devices.

“What we’re hoping is that not only will it be of interest to people but there are also some humorous clips in there and some poignant clips as well. I think it represents very much a dying way of life and the individuals have fantastic memories.”

He said the people interviewed seemed relatively content with their lot. “The people were very resilient, very resourceful and they seemed to be incredibly content with what we would consider the little they had at the time. The sense of community was so strong then and it really does come across in the clips that we put on the wall.”

Cuimhneamh an Chláir has been around for five years now and is an entirely volunteer-run charity. It is one of Ireland’s most successful oral history project.

Cormac said there are a number of new projects coming up.

“Just recently, we were contacted by Waterford Institute of Technology. They have a civic epistemologies project and they’ve got EU funding to develop this community-based oral history project, which they’re doing with local schools. When they started doing a search to seek advice, we cropped straight up so we’re going to be working with them, kind of help them develop guidelines and interview processes for the students and we’re going to be providing some training for them as well.

“James Madison in University in Virginia have been in contact and they have a foreign project they do each year, where they bring their students to a foreign country. This year they’re coming to Ireland and we’re going to be working with them for about seven or eight days. They’ll be based in Doolin. It’s going to be a collaboration between us advising them on oral history and them maybe doing a small project for us in return,” he concluded.

Previous Food, glorious food but not for pets
Next Doolin craftsman is furniture maker of the year