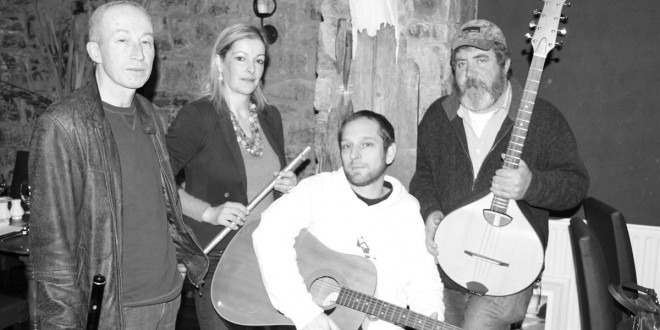 A CLARE group of musicians have made it through to the semi-final of the Le Crunch Apple of My Eye song contest with Today FM, having been selected from nearly 1,000 entries nationwide.

Ardsollus, featuring Ennis Gospel Choir, have been selected as one of the 10 semi-finalists.

The group is made up of Daithí Moore on bazouki and lead vocals; Tony Walker on keyboards; Tola Custy on fiddle; Siobhán Peoples on fiddle; Blackie O’Connell on uilleann pipes; Zyn O’Halloran on harp; Alf Duggan on dobro and Connor Myers on drums.

Ardsollus, which was only formed weeks before the competition opened to entries, chose to do a cover of Rudimental’s Feel the Love, which was selected by competition judges to make it through to the semi-final on The KC Show last week.

Tony, who is from Quin, said they have put a trad feel into their version of Feel the Love and he outlined how their entry came about.

“It was an idea we had over a couple of pints before a session and we ran away with it from there. It was a mutual thing between me, David Moore, Kevin Ryan and a couple of the others. A few phone calls were made and we asked them to listen to this track and see what they thought. Within the space of 24 hours, everyone was like ‘why not, let’s see what happens’,” he said.

The group is made up of primarily traditional musicians, supported by Ennis Gospel Choir and the recording was put together by Tony.

“We wanted to do something a bit different. I recorded everyone myself and put everything together. I’m learning trad at the moment and I play keyboard and a bit of keyboard. I was more involved in putting the track together and recording everyone and getting it organised. It’s something different than doing the usual trad stuff,” he said.

The name for the group came from Ardsollus in Quin, as there are a few in the group from that locality, while Blackie, Siobhán and Tola are from Ennis.

“We have all got connections and know each other. It was something local and we put it out there as a name and no-one had any objection. We didn’t really know where this would go. We thought it was a bit of craic to start with. We had probably about 15 days from the deadline to get everyone on the same page and record it and put it together and get it in,” he said.

When it came to choosing the song itself, Tony said they wanted to do something that was modern, new and completely different to trad.

“My friend and I had both watched Jools Holland Hootenanny on New Year’s Eve and Rudimental was on. They did a few songs, we looked at a few of them and settled on this one because it was catchy. It was a simple track so the music would be able to stand out more. Everyone listened to it, liked it and liked the track and everyone put their own stamp on it and it did fit together very well,” he said.

This was the only entry they submitted and they were delighted to have it chosen for the semi-final. They are already practising it live, in preparation for the announcement that they might get through to the final on March 7.

Tony said the group are delighted to get the exposure and airplay on Today FM in the run-up to the competition and they hope the county will get behind them by voting.

“We got featured two days after we uploaded it and Today FM featured the song as one of the new tracks that came in and we got played before we made the semi-finals. They were calling it tradimental and we kind of had a feeling we might do well. People in general seem to really like the track. It’s different and most of the other entries have done straight covers of songs. Ours is completely different from the original and complements it. Ennis Gospel Choir is really involved with it too,” he said.

As for plans after the competition, win, lose or draw, Tony said as a lot of the musicians are already very busy in their own right, it would depend on how the response goes from the competition as to how they will progress.

“We need to sit down and see how it goes first and take it from there. Everyone is really busy so it’s something we need to really sit down together and discuss. The lads were looking at doing something a bit different and they have enjoyed this,” he said.

As part of the semi-final stage of the competition, the public are being asked to vote for their favourite song online at www.ouitolecrunch.com. Five acts will go through to the national final, which will be broadcast live on Today FM on Friday, March 7 at The Sugar Club. Finalists will perform live on stage in front of the panel of judges and KC Show listeners. Among the judges once again this year is Royseven and RTÉ star Paul Walsh and songwriter Róisín O.

The overall winner stands to win €8,000, while other finalists will win €500. Last year, almost 1,000 artists from across the country, from ages eight to 80, participated in the first LeCrunch Apple of My Eye song contest.