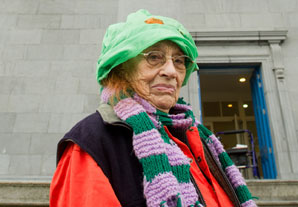 Two anti-war protestors have been found guilty of interfering with the proper use of Shannon Airport by going onto the main runway last September.
Margaretta Darcy aged 80 of 10 St Brigid’s Place, Woodquay, Galway and Niall Farrell aged 60 of Ballynacloghy, Maree, County Galway pleaded not guilty to a single charge of interfering with the proper use of Shannon Airport on September 1, 2013 contrary to the Air Navigation Transport Act 1950.
The trial opened at Ennis District Court before Judge Patrick Durcan on Tuesday where evidence was heard from Independent Deputy Clare Daly TD, Irish Times security analyst Tom Clonan, Nobel Peace Prize winner Mairéad Maguire, University of Limerick lecturer John Lannon, peace activist Ed Horgan, airport police officers, Shannon airport officials and gardaí.
During the hearing evidence was given that the two defendants were found to be on the main runway of Shannon Airport on the date in question, wearing orange boiler suits and carrying placards stating “The people of the world say hands off Syria”, and “USA war machine out of Shannon”.
The defendants argued this was a peaceful protest being done out of the necessity. Ms Darcy called five witnesses, which testified to their views on the use of Shannon airport by the United States military.
Garda Inspector Tom Kennedy, prosecuting maintained that the defendants had entered a restricted area of Shannon Airport, known as “airside” space without authorisation, and as a result were interfering with the proper use of the airport.
While it was accepted by the court that the defendants had a right under the constitution to assemble, and to peacefully protest Judge Durcan said any such action should be carried out within the confines of the law.
He found both defendants guilty and sentenced them both to two weeks in prison, which he suspended the sentence for two years on the condition they enter a bond to keep the peace and be of good behaviour and also not to enter Shannon Airport. He gave them 14 days to enter the bond and fixed recognisance in the event of an appeal on the defendant’s own bond of €250.

Carol Byrne is a reporter at The Clare Champion newspaper reporting on news in the East Clare area and the arts. She also covers the courts in County Clare and has received seven national awards for this coverage from the Law Society of Ireland and a National Lottery Local Ireland national media award for Best Community Story 2019. A Masters in Journalism graduate of NUI Galway, she also holds a Bachelor of Arts from the University of Limerick in Music and Media Studies, and a Higher Diploma in Irish Legal Studies. She began her career interning at The Limerick Leader and Clare FM, before taking up a full time post at The Clare Champion in 2006.
@@Carlsburn
Previous Breen to chair Joint Committee hearing with Gilmore
Next Hurling fixtures postponed