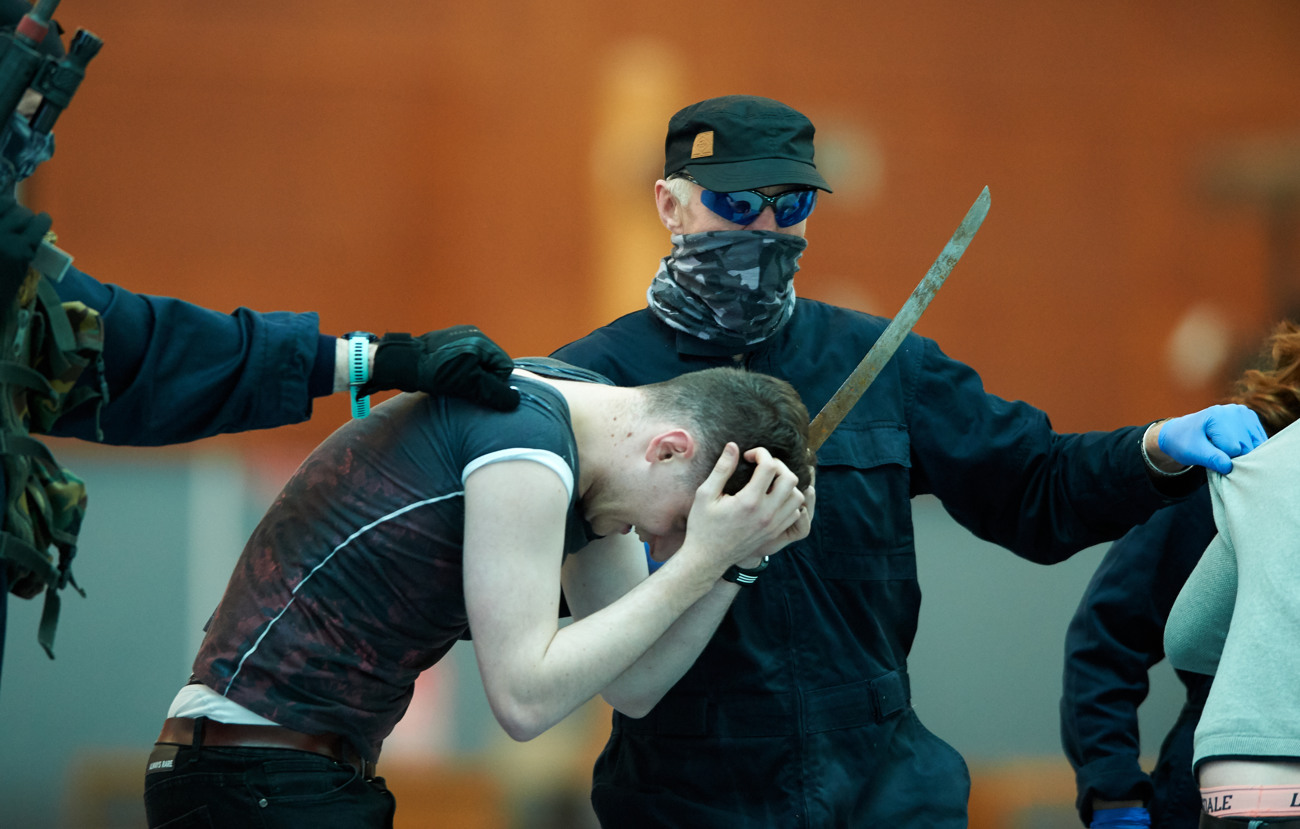 Attackers rounds up passengers as hostages during a bilateral training exercise between An Garda Siochana and the Defence Force,s hosted at Shannon Airport. Photograph by John Kelly.

The staged event saw the airport being stormed by an armed group, calling themselves the Doomsday Cult. During the simulated attack, the terrorist group fired blank rounds of ammunition at trainee gardaí who were acting as passengers in the departures lounge of Shannon Airport.

As the exercise progressed it triggered a coordinated armed response from members of the Garda Air Support Unit, the Defence Forces, the naval service, the air corps, the EOD, and Shannon Airport personnel .

The situation then moved to a hostage negotiation scenario where a tactical team was deployed to reason with the terrorist group and recover the hostages.

The exercise was staged at Shannon Airport between 2.30pm and 4pm on Tuesday and involved upwards of 130 individuals. The operation was conducted in such a way that the participants were not aware of how the scenarios would play out.

To simulate a real life incident fake blood was used on the casualties and blank rounds were also fired.

This is the first time that a simulated terrorist training event of this scale has been held at Shannon Airport and it follows similar training exercises held in the Docklands Railway Station in Dublin and in Dublin Port.

Following the training event a “hot debrief” was held to analyse the outcomes and the procedures implemented during the exercise. This was lead by Inspector Kieran Ruane, of Ennis Garda Station who was overseeing the operation.

Carol Byrne is a reporter at The Clare Champion newspaper reporting on news in the East Clare area and the arts. She also covers the courts in County Clare and has received seven national awards for this coverage from the Law Society of Ireland and a National Lottery Local Ireland national media award for Best Community Story 2019. A Masters in Journalism graduate of NUI Galway, she also holds a Bachelor of Arts from the University of Limerick in Music and Media Studies, and a Higher Diploma in Irish Legal Studies. She began her career interning at The Limerick Leader and Clare FM, before taking up a full time post at The Clare Champion in 2006.
@@Carlsburn
Previous Train services to resume on Limerick to Ennis line
Next Carey calls for talks on Ballycar flooding