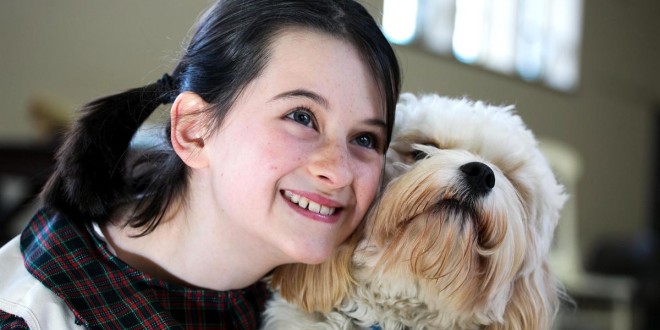 Aoibh O'Reilly as Annie with Sandy during rehearsals for Annie The Musical. Photograph by Arthur Ellis.

Annie to capture the hearts of Glór audiences

LIFE is busy for Ennis Musical Society, as its members put the finishing touches to their 2014 production.

Presenting in Glór, the society will run with a string of six performances of Broadway hit musical, Annie, beginning next Tuesday and running through to Saturday, March 1.

Kate Corrigan, chairperson of Ennis Musical Society, said there is a lot to prepare in getting a musical to the stage.

“There are lots of administrative bits and pieces to be taken care of and we’re now obviously immersed in final rehearsals. It’s going to be a great show and we’re delighted that just under 100 local performers of all age groups will be taking part,” she said.

Within this large cast, seven young girls aged from seven to 15 years of age will open the show, playing the parts of Annie and her best friends in the New York City Orphanage.

Twelve-year-old Aoibh O’Reilly from Tulla takes on the title role and is ably assisted by Holly Dunphy; sisters, Sally and Julita Fox; Rhona Kearney; Emma Haran and Sinéad Coughlan. Despite their ages, the seven are seasoned performers. Rhona, Emma and Sinéad each played lead roles in Ennis Musical Society’s 2012 sell-out production of The Sound of Music.

Describing the story of Annie, Aoibhy explains that life for her character in the orphanage is pretty tough.

“The lady who runs the orphanage, Miss Hannigan, is really nasty to the children, yet we all do our best to be happy. The orphans really mind and support each other,” she said.

Indeed, the same is true off stage, she said. While preparing for the production, the seven girls, who are from Ennis, Tulla, Connolly and Shannon, have really bonded as friends.

Annie is a show for all the family and Ennis Musical Society’s production is one big family affair. Apart from the Fox sisters performing side by side, Sinéad Coughlan, Holly Dunphy and Emma Haran will also share the stage with siblings and/or parents. There are also other sisters, cousins and friends involved in the children’s chorus.

Selected from more than 100 aspiring candidates, this talented bunch of seven are enjoying every minute of it.

“We all love the buzz of being on stage,” said Julita, whose younger sister, Sally, added that she most enjoys dancing and performing particular songs from the show.

Each of the girls in the group commented on the fact that the rehearsal schedule over the last few months has been long and tiring but each is also quick to highlight that playing a lead role in Annie has been one big adventure.

For youngest member, Holly, it’s all been “brilliant fun and I get to stay up late”.

Amid all that fun, however, Rice College pupil Sinéad is also busy preparing for her Junior Certificate exams. In fact, she will be sitting her pre-exams the same week she will be performing on stage in Glór.

“It’s all a bit of a balancing act but everybody in my family, in school and in the musical is really supportive,” she said.

The seven have substantial parts within the show that involve singing, dancing, dialogue, arguing among themselves, playing tricks on the evil Miss Hannigan and, much to their parents’ surprise, scrubbing floors alongside their peers in the children’s chorus. No-one shows any outward signs of nerves though.

The fear of forgetting lines is common to all, while Rhona notes her fear of slipping in her tap shoes. For Emma, the priority is to mind her voice and avoid hoarseness, while Aoibhy expresses slight worries about quick costume changes.

Along with these minor concerns come high hopes and expectations. Holly is looking forward to playing in front of full houses, while Sally and Rhona hope audiences will appreciate the hard work that has gone into the show.

Julita refers to the well-loved song, You’re never fully dressed without a smile, and emphasises that audiences will leave Glór with smiles stretching from ear to ear.

“Ennis Musical Society is thrilled to have these girls performing in our production of Annie, along with the 50 others involved in the children’s chorus,” Kate said.

“The adults involved in the production are really enthused by the talent of the younger members. There’s actually a risk they’ll put us to shame. We’re really optimistic about this show and hope local audiences will once again show their support for our performances,” she concluded.