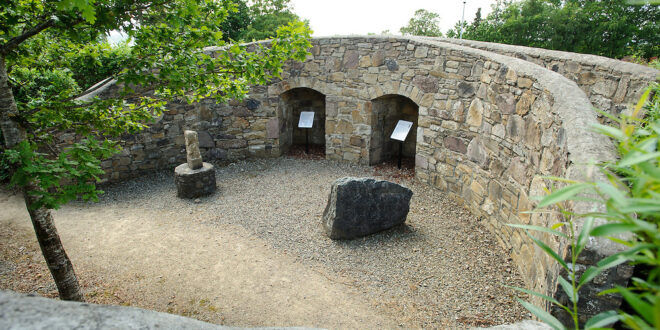 A general view of the Aistear Park at Mountshannon. Photograph by John Kelly.

SANITIZER dispensers have torn down at Aistear Park, in a spate of weekend vandalism which has been described by the head of Mountshannon Community Council as “just horrendous”.

Last Monday morning, members of the Community Employment (CE) scheme arrived at the park to find a significant amount of rubbish, with broken glass and fragments of cans strewn in the grass close to a children’s play area. A popular community book-swapping facility, which is located in the park, was also vandalised, forcing the community council to consider removing it altogether.

“The CE scheme members have worked so hard during, the earlier lockdown, to keep the park up to a standard where everyone in the locality can get in and enjoy it,” said Joanne Dunphy-Allen. “We were delighted to get support from Clare County Council who gave us the sanitizer dispensers and signage, so that we could really help people to feel safe in the park and to remind them of their personal responsibilities in keeping everyone else safe too. CE staff would fill the dispensers every Monday and that was proof, to us, that they were being used and appreciated. We had one just at the archway at the entrance to the Aistear and another close to the playground. To see them ripped down is just unbelievable. It would have taken a lot of force to tear them down and I can’t understand the mindset of someone who would do this. It feels like a real kick in the teeth for the volunteers and the whole community who have worked to create and maintain the park for so many years and in really difficult times.”

The chairperson of the community council added that, as we head into Level 5 restrictions, fund-raising to replace the dispensers will be very difficult. “We can’t organise parties or events, our only source of income is the local lotto, we can’t afford to pay for more dispensers, it’s really frustrating,” she said.

Littering and vandalism had previously created problems for the community council, but there had been hope locally that that had come to an end. “We did have an issue some years ago when the book-swapping library was targeted and books taken out and burned,” Ms Dunphy Allen said. “Things had been going really well for four or five years, that’s why the situation now is a worry. People regularly bring books to the library to share and it’s a real focal point in the park. People use it to leave notes for others, and as a lost-and-found facility for glasses and jackets and toys. Being able to share books during the pandemic has been a lifeline and it’s awful to think that we might have to now consider taking the facility out altogether.”

The amount of rubbish left behind in the park is also a huge source of frustration locally. “We don’t have many bins in the park, which is a pity in itself,” said Ms Dunphy Allen, “but we want to promote a ‘leave no trace’ policy. Everyone understands nowadays that when you visit a beach or a park, or other amenity, that you are expected to take your rubbish with you. It’s so annoying now to find this kind of rubbish, particularly when we’re already trying to tackle the problem at Mountshannon Harbour. What is really upsetting about this particular incident is that bottles and cans have been broken up and strewn all over the place and in the grass where children play. There’s really a bit of nastiness involved in this.”

Since the success of Mountshannon in winning the National Tidy Towns Award in 1981, plans to protect vital green space in the heart of the village began to take shape. Efforts to buy site, known locally as The Rectory Field, for community use, date back to the ‘90s, when expert advice was sought on its potential. An action group was formed to oversee the purchase of the land by the community with support from LEADER and Clare County Council in drawing up a plan and developing amenities. The design of the park has kept the monastic heritage of the area in mind. Guiding principles in the brief drawn up by architect Neil Hill for the community council included the preservation of the open nature of the site and its views of Lough Derg and Holy Island, as well as the theme of pilgrimage. The name itself reflects the concept of a journey and several elements of the site, including a maze, also reflect that theme. Thousands of trees have been planted in the park, which is located at a key site between the village and the harbour. Over almost a quarter of a century, the development of Aistear Park has enjoyed a huge community buy-in. That sense of local pride is now something Ms Dunphy Allen fears may have been damaged over the years.

“We have four-and-a-half acres in total here and the land was bought by the community, for the community and with the support of the local authority,” she said. “We’re all very proud of what has been created and it’s there for everyone to enjoy. We have created a maze, a childrens’ playground and have adult exercise equipment in place. We’re looking at creating a section of the park which will have sensory elements for people with autism or dementia. There is a real sense of ownership by the community, because people locally paid for the land and fund-raised for facilities. Somewhere along the line though, this value on the park seems to have been lost and that’s a real concern. To see the state the place was left in on Monday morning is heart-breaking. Some people seem to have lost sight of the fact that hard-earned money from the whole community has gone into the Aistear and it caters for so many people. Even school groups from the wider area come down to enjoy the park and it means a lot to everyone.”

The incident has been reported to Gardaí and Ms Dunphy Allen said the force has increased patrols in response. “We would ask people to please respect the park and those who maintain it and use it,” she said. “We’re also asking people to be vigilant so that we can all continue to enjoy the facilities here.”

Fiona McGarry joined The Clare Champion as a reporter after a four-year stint as producer of Morning Focus on Clare FM. Prior to that she worked for various radio, print and online titles, including Newstalk, Maximum Media and The Tuam Herald. Fiona’s media career began in her native Mayo when she joined Midwest Radio. She is the maker of a number of radio documentaries, funded by the Broadcasting Authority of Ireland (BAI). She has also availed of the Simon Cumbers Media Fund to report on development issues supported by Irish Aid in Haiti. She won a Justice Media Award for a short radio series on the work of Bedford Row Project, which supports prisoners and families in the Mid-West. Fiona also teaches on the Journalism programmes at NUI Galway. If you have a story and would like to get in touch with Fiona you can email her at fmcgarry@clarechampion.ie or telephone 065 6864146.
Previous “It’s no way to have to live”
Next Kinvara-Based Author Releases New Hare Book