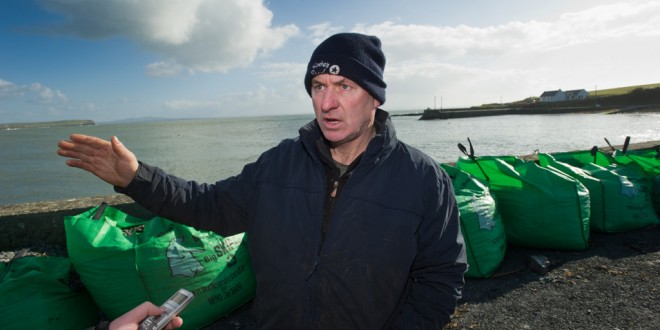 Kilbaha locals including, local business man Bernie Keating are opposed to Clare County Council's decision to close an 80m stretch of road in the village. Photograph by John Kelly.

Anger in Kilbaha at road closure

RESIDENTS in Kilbaha are angry that the main access road to the Loop Head village has been cut off. An 80 metre stretch of the road has been badly damaged in the recent storms and floods.

The Kilrush Area Office of Clare County Council closed the road on Saturday morning February 1 in the immediate aftermath of Storm Bridget. The council said this was “to safeguard the wellbeing of the general public and motorists.”

“On Saturday evening it appears a member of the local community removed concrete bollards that had been put in place by the council. The council this morning once again closed off the road in the interests of public safety,” a county council statement issued on Monday stated.

However local residents feel that the road should be open to local access as some elderly people are left in a vulnerable position, while pupils at St Cuan’s NS face an eight mile round trip to school in some cases.

“The reconstruction of the road and adjoining seawall is presently the subject of a Clare County Council submission to central government.

“The council does not have the resources to repair the road and seawall and is awaiting indication from Government regarding the level of funding to be received before repairing the damaged infrastructure. As requested by Government, a detailed submission for funding will be submitted to Government this week as a follow up to a preliminary damage report submitted in early January. The council is cogently aware of the potential impact of any road closure on tourism in the Loop Head Area and is pursuing the need for funding with Government as a matter of urgency,” Clare County Council’s statement concluded.

West Clare native Peter O'Connell has worked for The Clare Champion for 12 years and covers everything from sport, especially GAA, news, features and has been even known to branch into the fashion scene on occasion.
@@westclarepage
Previous Storm damage running at €36.8m
Next Job opportunities in tourism