Home » Sports » All so easy for Limerick 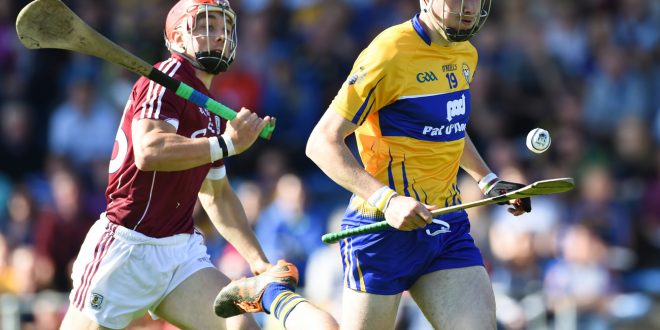 Speculation continues that David Fitzgerald (Inagh-Kilnamona) will line out against Wexford on Saturday Photograph by John Kelly.

Disappointing times for Clare GAA followers continued at the Gaelic grounds in Limerick this evening when the county’s under 21 hurlers were comprehensively beaten by Limerick in the Provincial semi-final.

The writing was on the wall from an early stages as the home side dominated all the key areas. By half time they were nine points clear, 1-14 to 1-5 and Clare were fortunate that they were not much further behind at this stage as Limerick has failed to convert four clear goal chances in the first half

Limerick went into the game as strong favourites and the writing was on the wall early as they took a commanding lead after just ten minutes.

When Clare hit five unanswered points inside the first ten minutes of the second half to cut the winner’s lead to five points, Clare supporters in the official attendance of 5,577 held out hopes of a rally.

However, it wasn’t to be and the home side regained control and were full value for their win which puts them into the final where they will meet the winners of this Thursday’s evening’s semi-final between Cork and Waterford at Walsh Park.

On the day Clare struggled in far too many positions and the home side dictated matters for almost all of the sixty minutes.

Points were exchanged twice in the opening three minutes but then the home side hit 1-5 without reply in a six minute spell to lead after ten minutes on a score of 1-7 to 0-2.

Clare fans were given some hope in the eleventh minute when Billy Connors found the net after good work by Inagh-Kilnamona pair David Fitzgerald and Jason McCarthy.

Clare started out with a sweeper with Ben O’Gorman filling the role but they had little success as Limerick cut through their defence time and time again.

Corner backs Ciaran Cooney and Conor O’Halloran had picked up yellow cards inside the first ten minutes for pulling down Limerick forwards as they headed for goal. By half time seven Limerick players were on the scoresheet with Aaron Gillane leading the way with 0-8, six coming from play.

To make matters worse Clare finished with fourteen men when corner back Conor O’Halloran picked up a second yellow card just at the end of normal time.

David Fitzgerald, O’Halloran, after a shaky start, and Billy Connors in the first half worked hard for Clare but on the evening there was no denying Limerick’s superiority