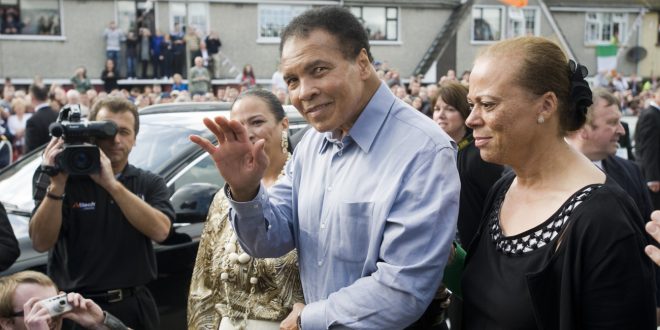 Muhammad Ali arrives at Turnpike road, Ennis, his ancestral home, during his visit to Clare in 2009. Photograph by John Kelly.

Ali ‘the greatest’ has died

“I am the greatest.”  One of the most famous catchphrases in the sporting world will be heard no more. Muhammad Ali, three times world heavywight boxing champion, peace activist and freeman of Ennis has died at the age of 74.
On September 1, 2009, Ennis came to a standstill, as crowds lined the strteet to watch Ali travel in a cavalcade to The Turnpike, birthplace of his great grandfather, Abe Grady, who left for the US in the 1860s.

He was accompanied by his wife, Yolanda ‘Lonnie’ and other family members. He surprised his wellwishers when he alighted from a people carrier to unveil a plaque at his ancestor’s house.

As crowds cheered ‘Ali, Ali’, he turned and – in his true showman style – took a boxing stance and thre a punch.

Muhammad Ali then travelled to Waterparkhouse where he was afforded a civic reception and granted the freedom of Ennis. It was truly one of the great days in the history of Ennis.

Leading the tributes in Ireland to the colourful character, President Michael D Higgins said, “Many will remember the wit, grace and beauty he brought to boxing and some will recall his visits to Ireland.

“All over the world people also flocked to hear him offer his view on the achievement of democracy and particularly equal rights when they were so strikingly missing in some of the richest countries of the world. He brought his message of freedom and respect for people of all races to all the continents of the world.”

President Higgins also said as a sportsman and humanitarian, and as someone who struggled for a very long time with one of the most debilitating illnesses.

“He offered courage in the face of great difficulties. He was intent on going on communicating right to the very end.

“Ali will be missed not only by his close friends and family but by those who heard him and were influenced by him, all over the world,” President Higgins concluded.

Cathaoirleach of Clare County Council, James Breen said it was with great sadness that the people of the Banner County heard of Muhammad Ali’s death.

“He gave enjoyment to millions of people around the world throughout his sporting career and also gained huge respect for his humanatarian work.

“It is fantastic that we can claim him as one of our own. I extend the sympathises of the people of Clare to his family and the boxing world. Muhammad Ali – The Greatest – will always be in our thoughts,” Councillor Breen said.

Ennis tribute to Ali in Louisville