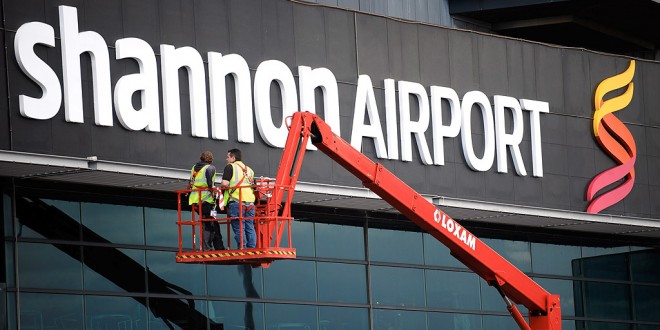 HUNDREDS of young people are in the terminal of Shannon Airport today for the Irish Technology Leadership Group’s Young Innovators 2014 event.

The teenagers, from secondary schools around the country, including students from St Flannan’s in Ennis, St Patrick’s Comprehensive in Shannon and St Anne’s Community College in Killaloe are sharing their vision for the world in 2064 through an innovation and technology challenge.

They are being asked to outline how they think people may live, work, play, travel, learn and shop in 50 years time.

Chair of Shannon Rose Hynes Rose Hynes was there and she said it’s very interesting to think about what the future may bring, given how quickly technology can change. “If you just think 20 years back, people weren’t even using faxes, they were using telex. It’s quite amazing. I was in GPA when emails became a big thing, it’s not that long ago.”

Luke Lawlor, a Leaving Cert student at St Flannan’s was among the pupils there and he said that they had an idea for a home in which new technology would play a huge role. “We have an idea for automated housing, where you have a central AI in your house that does all your cooking and cleaning, if you’re away on holidays it’d look after your home. You could programme it to cook a chicken in the oven say, or sweep the florr. It’d wake you up in the morning and if you’re away you’d be connected to it on your phone.”

While self sweeping floors may sound a bit unlikely in 2014, whose to say they won’t be commonplace well before 2064?

Owen Ryan has been a journalist with the Clare Champion since 2007, having previously worked for a number of other regional titles in Limerick, Galway and Cork.
Previous East Clare man dies in traffic accident
Next Brian Boru and the Hakka