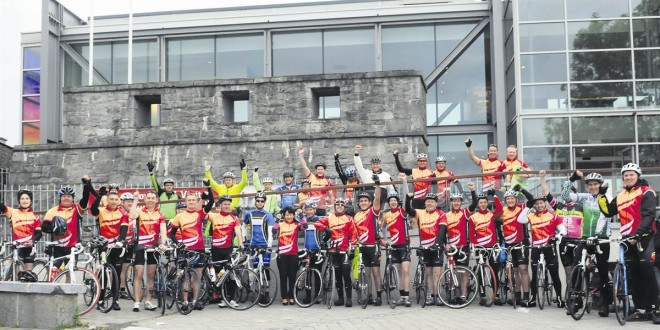 Shannon Airport staff got on their bikes at the weekend to undertake a gruelling 175km charity cycle.

The cyclists braved the worst of the May weather, as driving wind and rain throughout the 10-hour cycle added to the challenging circuit. In all, they raised €14,000 for the neonatal unit at the Regional Maternity Hospital, the Samaritans and the Clare branch of the Multiple Sclerosis (MS) Society of Ireland.

The group set off at 8am from King John’s Castle, Limerick, on Saturday, for a route that took them all the way to the Cliffs of Moher, before concluding at the airport.

Speaking after the cycle, Shannon Airport’s operations director, Niall Maloney, said the effort was more than worth it. “It was a tough cycle for all involved, not least a number of people who are new enough to the sport, so they deserve great credit as we had a very tough route and very challenging weather.

“We raised around €14,000 for three fantastic charities; that was €4,000 beyond the target we set. The Samaritans are the airport staff’s chosen charity for 2014, while MS Ireland and the neonatal unit in Limerick have impacted positively on the lives of colleagues and family members here over the years.”

Among those cycling was Shannon Airport Search Unit member Mike Linnane, who was diagnosed with MS nine years ago. He took on the cycle to raise awareness and funds to support the incredible work done by MS Ireland.

“MS Ireland does wonderful work and I wanted to show that there is life after being diagnosed with MS. The important thing is to stay positive, take each day as it comes and live each day to the full,” said Mike.

Shannon Airport chairman, Rose Hynes said huge credit is due to the staff and others for undertaking the cycle.

“Shannon Airport staff give tremendous support to charity each year and Saturday’s cycle was another great example of that. It was a huge undertaking by them and is raising much-needed funds for three charities that do incredible work for people throughout our region and beyond,” she said.