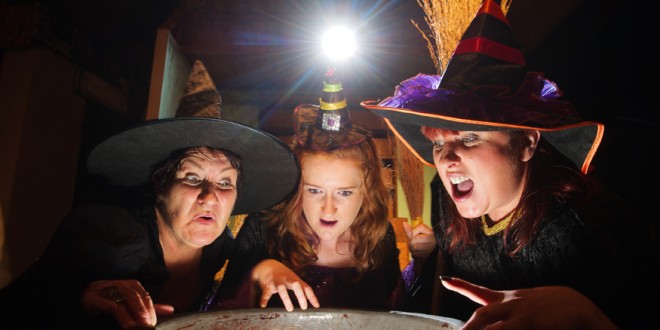 MUSE Productions in Shannon return to action following their production of Waiting for Godot earlier this year and make a move towards the vaguely ridiculous and spooky with Wyrd Sisters.

The production, which will be a special treat for those getting into the Hallowe’en spirit, is based on the best-selling novel of the same name by Terry Pratchett.

It was adapted for the stage by Stephen Briggs and is a parody of Macbeth.

Running for five nights at the Oakwood Arms Hotel, Shannon, Wyrd Sisters is a fun-filled drama for all the family featuring demons and ghosts, ghastly forests and storms.

The play is set in the Kingdom of Lancre, but something is rotten in the state. The evil Duke Felmet has murdered the previous king and now newly crowned, he will stop at nothing until the whole kingdom is under his iron fist.

The only one who could take the throne away from his grip, however, is the missing infant prince. The young prince, hunted by the Duke’s men,  finds safety under the protection of three witches, Granny Weatherwax, Nanny Ogg and Magrat Garlick.

The witches live by the rule of never meddling in politics but with the life of a child at stake and the fate of the kingdom in the balance, Granny adopts a new saying about rules. “If you’re going to break ‘em, break them good and hard.”

The new Muse Theatre is a wonderful addition to the Shannon arts scene but operates under limitations. Battling with what their PRO describes as “a stage the size of a pocket handkerchief with the wings of Tinkerbell”, they have managed to put this Discworld play together under the stewardship of innovative set designer and director Martin McNelis.

Martin designed the sets, which were constructed by Frank Boland and his team, costumes were designed by Deirdre Willetts, sound is by Tony Little, lights by Diarmaid O’Loughlin and props are by Deirdre McNelis.

Wyrd Sisters is one of the largest casts yet assembled by Muse and offers up a real mix of youth and experience.
The case features Nicky Doherty, Aideen Clancy and Lauren Dunne playing the titular Wyrd Sisters, while Ted Germaine makes a welcome return to the stage as both Vitoller and the dead King Verence. Eoghan Rice plays the unhappy Jester, while Tony Little and Kathleen Browne have a wonderful turn as the evil Duke and Lady Felmet.

Chris Willetts plays the actor Tomjon and Eoin Sheedy, the playwright Hwel. All other roles are performed by Muse players who have to switch between being guardsmen, peasants and actors at the drop of a hat including Deirdre Willetts, Cara Sheedy, Sean McInerney. Eoghan Ross, Duileann O’Sullivan, Elliot Germaine and Niall Ross.

Patricia O’Neill of Muse Theatre said, “This is theatre at its finest, with plenty of slapstick for the kids and plenty of added depth and gags for the adults.  As one commentator so aptly put it ‘take Shakespeare’s Macbeth and turn it up until the knob comes off’.”

Wyrd Sisters will run over the October midterm break, from October 29 to November 2, at 8pm nightly. Booking is available on 087 1553055.