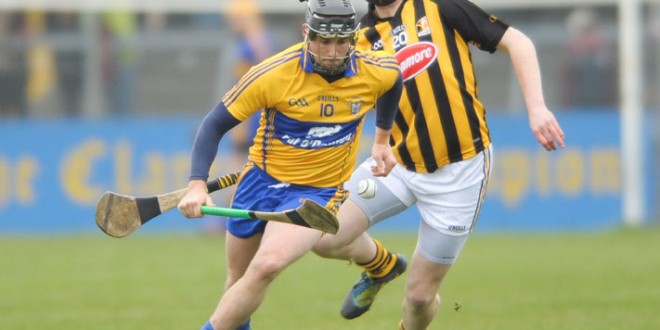 Colin Ryan and Walter Walsh facing off in the first round of the National Hurling League at Cusack Park, Ennis.

A winning start for Clare

THE meeting of the All-Ireland and National league hurling champions, Clare and Kilkenny, attracted just over 10,000 to Cusack Park in Ennis where the home side got their 2014 league campaign off to a winning start with a one point victory. 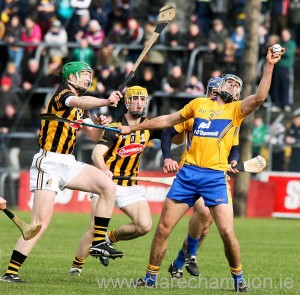 It was a game which could have gone either way but, at the end of the day, the All-Ireland champions did enough to avenge last year’s league result at the same venue when Kilkenny won by the same margin.

Given that there were huge doubts about the availability of the pitch all week, it held up remarkably well while being, understandably, heavy.

For much of what was a very entertaining contest, it was a battle between the respective freetakers. Clare’s Colin Ryan, last year’s top scorer, contributed 1-9 of Clare’s tally while Henry Shefflin kept the Kilkenny flag flying high with an impressive tally of 0-12.

It was a win the home side just about deserved but few would have complained had the tie ended level. The teams were all square on five occasions over the seventy minutes before Clare opened a two point advantage with four minutes remaining. The visitors piled on the pressure in search of an equaliser but could only manage one more point from Shefflin as Clare held on for victory by the narrowest of margins.

With twelve of their All-Ireland winning team in their starting line up, Clare raced into a three point lead inside five minutes, all scored by Colin Ryan who had guided Salesian college Pallaskenry to the Munster colleges senior C title twenty four hours earlier. 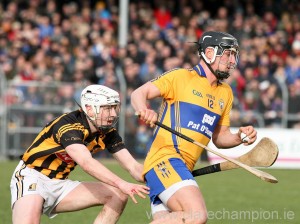 The game’s only goal proved to be a crucial score and it came after thirteen minutes when the Newmarket man finished off a good Clare move.

By the twenty second minute of the opening half, the home side had opened a five point lead, 1-7 to 0-5 but from here to the half time whistle they were outscored by the visitors, 0-6 to 0-1 leaving the teams level at the break 0-11 to 1-8.

The league holders looked to be in the better position at this stage as they would have the assistance of the wind when play resumed. Twenty minutes into the second half the sides were still level, each having added 0-5 to their half time tallies.

By now Clare had Podge Collins and Cathal O’Connell in their team and their presence followed by the introduction of Nicky O’Connell helped the home county edge ahead.

According to Clare manager Davy Fitzgerald “Kilkenny could have won that game just as easily as we won. It was a dogged type of game and we are under no illusions. We have an awful lot of work to do. What helped us in the end was the subs we used as they got us a bit of momentum”.

Kilkenny boss Brian Cody said he was disappointed with the end result and felt that the game could have “gone either way. It was a good game. There was a lot of good stuff about our performance. We had a lot of inexperienced players at that level. We were very much in the game at all times. The goal was a bit of a set back. We had a few goal chances that didn’t go in. The pitch was heavy but it couldn’t have been anything else after the weather we have had and it didn’t give any advantage to either side”.

While clearly pleased with the victory, Clare manager Fitzgerald is sure to be concerned about the fact that half of the starting forward line failed to get on the scoresheet. Kilkenny will also be concerned about the performance of their attack and particularly their full forward trio who struggled throughout against a strong Clare defence in which David McInerney, Seadna Morey, Brendan Bugler and Patrick O’Connor impressed in front of goalkeeper Donal Tuohy who produced two excellent saves.

Colin Ryan, Conor McGrath and substitute Cathal O’Connell did well up front for the Banner men who travel to Parnell Park to play the Anthony Daly managed Dublin in round two next Sunday