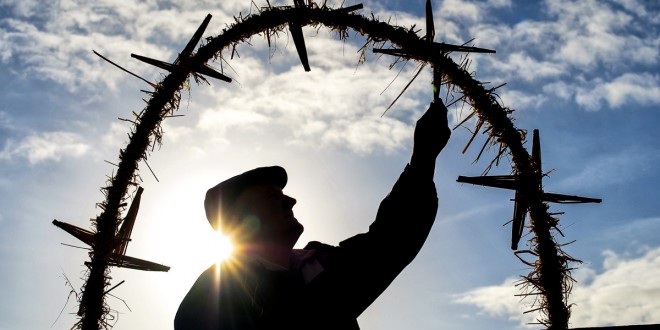 Heaven And Earth...Michael Egan of Spanish Point examines the traditional crosses made from straw into an archway over the entrance during the annual celebrations at St Bridget's Well, Liscannor last Sunday. Photograph by John Kelly.

A wealth of cultural heritage in Clare

Clare County Council is encouraging people to make submissions to Ireland’s National Inventory of Intangible Cultural Heritage, launched by Department of Culture, Heritage and the Gaeltacht.

Once compiled, the Inventory will acknowledge and promote Ireland’s living culture through official State recognition. In tandem with this, it will fulfil Ireland’s obligations under the 2003 UNESCO Convention for the Safeguarding of the Intangible Cultural Heritage, which Ireland signed up to in December 2015 to raise awareness of, and respect for, our unique living culture.

Congella McGuire, Clare Heritage Officer, said, “The goal is to record elements of our national and local living heritage that are still being practiced and passed down from generation to generation. The practices must be living practices in one form or another: still taught or practiced, and passed on. The idea is that the more that becomes known of these practices, then the better their active cultural contribution is acknowledged.”

She continued, “There’s such a wealth of cultural heritage in Clare and I hope that the Inventory will reflecting this. Groups and individuals who practice customs, traditions, crafts and other forms of intangible cultural heritage are encouraged to make submissions to the National Inventory. Some suggestions could include the practice and cultural contribution of genealogy in Clare, oral recording or placenames projects throughout the county. The traditions surrounding religious pilgrimage and holy wells are likewise perfect examples that could be looked at, as are traditional farming practices, traditional skills and stone walls building in the Burren and northwest Clare for example.”

Clare to shine on Culture Night