Home » Sports » A point decision for Cratloe will do Jerome 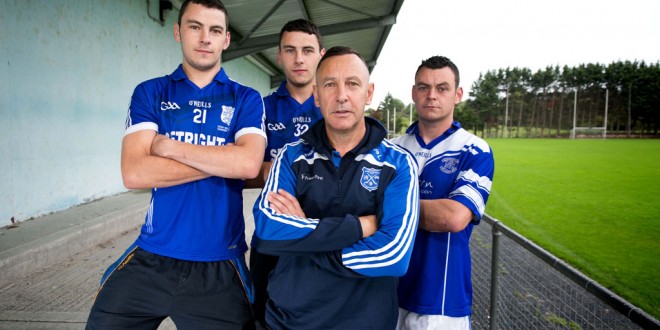 A point decision for Cratloe will do Jerome

Little did Irish international boxer Jerome De Loughrey think when he moved to Cratloe 22 years ago that he would now be playing such a prominent part in the successes of the GAA club.

A native of Kennedy Park in Limerick City, boxing and soccer were his sports back then.

“Boxing was my game and I also played soccer,” the 13-time capped Irish boxer told The Clare Champion.

“When I moved to live here, I started a soccer team. There was no juvenile football in the parish at the time and the lads asked me to enter a football team. I said I knew nothing about it. Nearly everyone that played soccer also played football. One of the first wins was in the U-16 C football and Sean Collins was part of that team. Colm (Collins) joined soon after that and football developed from there,” according to Jerome, who is a selector with the senior side. He has the added interest of having three sons on the panel.

“Martin Murphy and Sean O’Dea were with the adult team at the time and football has progressed steadily since then,” according to Jerome, who is adamant that the work must be done at juvenile level.

“All of these lads started out at 10 years of age. The group including Cathal McInerney and Podge (Collins) have won something every year. They are an exceptional group, they all grew up together and Colm and myself have been involved with them all the way. The success they are enjoying now was on the cards, as they are an exceptional bunch of lads,” said the man who trained Cratloe when they won senior B hurling honours.
In fact, De Loughrey had told the Cratloe players they would “win a football title before they would win the hurling crown”.

“All along, I felt we would be football champions. We never needed to have a drink ban in place with these lads. We knew there was no issue, that’s how good and committed a bunch they are. I said at the start of the season that we would win the double and we are just one win away from that but Éire Óg will be tough opposition,” he warned.

“There is a very close bond between these lads. I was from a soccer background and we could change clubs. We went to Setrights for a drink when we moved here and Cratloe were after winning something and I could see the camaraderie. You have to be involved to see the amount of good the GAA does for parish. It’s one of the reasons I fell in love with it, especially in Cratloe. There are no superstars, Everyone from Pierce to Barry Duggan, everyone does his bit. There is no talk about champions or winning doubles, it’s just get out and train and win the next match,” he said.
De Loughrey notes he is not alone in having family members on the panel.

“Colm Collins has three sons in the panel and there are others. All you want for your kids is to come out at the other end. When we won the football title last year, I had a picture taken on the field of myself and the three lads with the cup and it’s a brilliant feeling to know that you have been part of it. It’s a family thing, my wife looks after the lads’ gear and goes to all the games. It’s a family thing, it’s all five of us going to the games and it’s brilliant.”

The three-times Irish boxing champion added that “a lot of that goes down to the school and Jody O’Connor. Our numbers were dwindling for a while. I was chairman of the minor club when our numbers were going down. We put people into the school and teach the kids the skills of the game, people like Ogie (Murphy), Podge (Collins), Wesley (De Loughrey) and it’s a great development.

“I love soccer but I was good at boxing and you pick what you are best at. I have enjoyed the GAA as well. I love going to matches. When the boys were in St Caimin’s, I would always try to attend their games if I wasn’t too far away.

“The relationship between hurling and football in Cratloe is fantastic. There is never a cross word between either group. We love hurling as well as the same lads are playing. The relationship is fantastic. If you have the best interest of the club at heart, everything will be overcome. It’s the same objective, to put the club first. It’s for the good of the club,” he concluded.

Previous Cusack Park for €2.5m refurb?
Next Motherly tension in Éire Óg ahead of county final