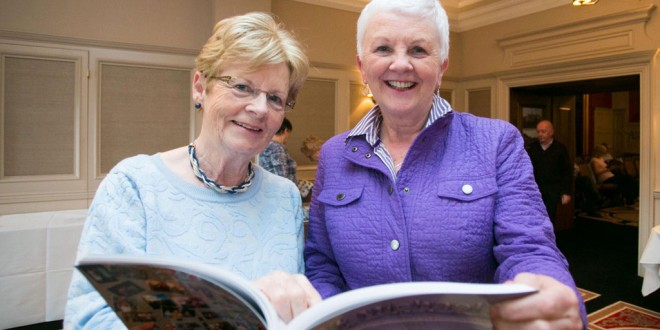 A night of nostalgia for St Michael’s residents

Clare Roots Society is to extend its work in publishing and recording the history of the county, after completing its programme in Ennis.
Its latest publication, St Michael’s Villas (Ennis) A History and Miscellany, was launched by Mayor of Ennis Johnny Flynn at the Temple Gate Hotel last week.
It was a night of nostalgia and storytelling and a great reunion of past and present residents of the estate, which was opened in 1953. It was also a night to recall the names of deceased residents, who were remembered at a special ‘Celebrating Our Story and Remembering Our Dead’ mass in Ennis Cathedral earlier in the evening, celebrated by Fr Tom Ryan, Shannon, a son of St Michael’s.
All the speakers at the launch congratauled St Michael’s Villas native Cora McNulty (the former Cora Hahessy), who documented the publication, which captures the history of a strong and vibrant community as well listing the wonderful achievements by many of its residents.
Among the attendence was CBS man, Brother Martin O’Flaherty, who is now based in Dublin. He was born in Doora just outside Ennis but was reared in St Michael’s, which he left in 1965 to join the Christain Brothers in Dun Laoghaire. He is a son of An Cheathrú Rua, Galway man Martin O’Flahety and the former Mary Shannon, who came from Brady’s Lane in Ennis. He has taught at primary, secondary and third level in Marino and is now involved in various projects.
Brother O’Flaherty preached the homily at the mass in Ennis Cathedral and told the congregation that when he left St Michael’s 50 years ago, it was a vibrant place. Prams and children in short pants were very much the life of the villas then, he noted. “Ennis of the 1950s was a very different place to Ennis today.”
His parents had four children and there was no certainty that they would be one of the lucky ones to get on the housing list in St Michael’s. So, as they passed along the Clare Road and saw the houses rising from the ground, you can only imagine their sense of excitement and uncertainty.
“It is good for us to remember that our parents were probably the first generation of working class people who could hope to have a house of their own that was modern and built to a high standard,” said Brother O’Flaherty.
“Imagine their sense of joy at being told they were on the housing list, then getting the key to the door, seeing the place for the first time and then finally meeting their new neighbours. Imagine the excitement of my mother and other mothers at the reality of having two shops at the top of the villas, instead of having to cycle or walk into town each time they needed something. Imagine how lucky they must have felt in the knowledge that there was a green area ‘out front’, as we used to say, where children could play and be supervised. All these new houses, shops and green areas were what today we would call infrastructure, that the first residents of St Michael’s were fortunate to have available to them. However, what our parents and grandparents created out of that infrastructure was a community. What they gave St Michael’s was a spirit; a sense of itself that was unique, warm and to be proud of,” he added.
He told the congregation that the first residents of St Michael’s worked at being good neigbours to each other. “Nobody had a lot, so if you needed something there was no embarrassment in dropping in next door and asking a neighbour for the loan of a cup of sugar, a drop of milk or even a loan of a bicycle.
“Tonight, it is important that we remember the first residents of St Michael’s. Not simply because it is a tradition that we still want to maintain in remebering our dead but because it is right for us to give thanks to the first residents of St Michael’s, our parents and grandparents. It is good for us to acknowledge that we stand on their shoulders, we build on the foundations they put down. Our core values grew out of the values that they gave us. Their dreams for us were what gave us the spur, the drive to go and achieve what they could never hope to have achieved. Their sacrifices were what made things possible for us. They were the people whose values and hard work created the spirit that we are proud of and happy to be associated with to-day. Of all the things we could do for our parents, two they would especially ask of us are to live a good and happy life and then to remember them at times of prayer and celebration, like tonight,” Brother O’Flaherty said.

Ennis native John Bradley, Clare Roots Society PRO, got proceedings underway at the Temple Gate Hotel, where a photograpic exhibition reflected on the life and times of St Michael’s residents.
He acknowledged Cora McNulty for accepting the challenge to compile the history of St Michael’s Villas and to write about the place of her youth. She undertook the assignment with passion and enthusiasm and dedicated long hours to research and gathering stories and photographs. She sat and reminisced with each family to relive community events, sporting occasions and to remember and recall family members no longer with them.
“Many people contributed to building St Michael’s into a vibrant community, a community that grew over time. They provided for each other and promoted life-long friendships and they participated actively in the social, economic, cultural, political and sporting life of Ennis. It is important that their contribution is not forgotten and in writing this publication, Cora had ensured that they will be remembered,” said Mr Bradley, adding that the society hopes to have books published on the history of every area in Ennis and, later, the county.
Paddy Waldron, chairman of Clare Roots Soociety, also paid tribute to everyone associated with the publication and invited people with an interest in history and genealogy to join Clare Roots Society.
Launching the publication, Councillor Johnny Flynn said, as an Ennis native, he could relate to a lot in the book’s brilliant collection of stories from the men, women and children who lived and grew up in St Michael’s.
“My late grandfather, Tom ‘the Tan’ McMahon was head of the Clare County Council machinery yard in the spring of 1951, which at that time was based at the courthouse compound, when the clearance and demolition of the nine acre site at Clonroadmore by the council got underway.
“By 1953, 76 houses and two shops were built by direct labour by the council, for a total cost of £100,000. When you see the contribution made in business, culture, sports, arts, music, dance and community organisations by the residents of St Michael’s to the quality of life in Ennis and Clare, there was a massive  return on that initial investment.
“A similar sum had been spent by the council a little over a decade earlier in building the county hospital in Ennis,” Mayor Flynn said.
“John Grenham, in an Irish Roots article in The Irish Times stated, ‘The single most active local genealogy society in Ireland is probably Clare Roots. A good example of their sheer industry is the My People, My Place & My Heritage project. This project brings together and preserves in a single book, information, records, stories and photographs for a particular area’.
“This is the 23rd book or booklet published by Clare Roots since we, as elected members, decided in Ennis Town Council in 2008 to financially support their work. Cora has gathered, with the help of Clare Roots Society, an amazing collection of stories  from the men, women and children about living in and growing up in this special section of the Ennis community.
“On behalf of my fellow elected members of the Municipal District of Ennis, I wish to thanks Cora and the people of St Michael’s Villas for her and their role in making Ennis and Clare a great place to live in, work and visit,” he said.
Cora McNulty acknowledged everyone who helped her in the publication of the book, while Fr Tom Ryan paid tribute to Clare Roots Society and said this and other publications would be valuable treasures for years to come.