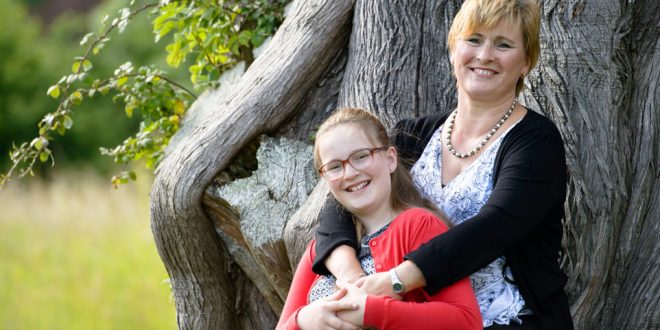 A debilitating and sometimes life-threatening condition became the focus of international attention after the Duchess of  Cambridge’s battle with Hyperemesis Gravidarum (HG) during  her pregnancies. Dan Danaher spoke with Clare Champion staff member Priscilla Lernihan about her own experience with HG

Priscilla Lernihan shares a common experience with Kate Middleton. Both of them suffered from Hyperemesis Gravidarum (HG) but Priscilla would rather not be able to draw any comparison with the royal family member’s experience of the condition.

Speaking about the “living hell” she endured during her pregnancy, Priscilla underlines the importance of early diagnosis in the treatment of HG. Her daughter, Sophie, will be 12 in August. A devoted mother to her, Priscilla says she could not have coped with a repeat of her HG experience with another pregnancy.

“If I had known back then what I know now, it would have been a very different experience. I was lucky to have a healthy, beautiful baby girl, Sophie, at the end of it, for which I am very grateful.

“I can state categorically that HG prevented me from having any more children. I know I could not survive that experience again. The fact that people doubted that you could be that sick forces you into a terribly lonesome place,” she says.

The Ennis woman’s experience began three and a half weeks into her pregnancy. She didn’t realise she was pregnant at the time but once it was confirmed on December 3, 2003, she had to rest in bed.

She had the following week off as holidays. However, she never left the house that week, except to go to a health shop to see if they could give her something to cure what she thought was morning sickness. Her knowledge of HG was limited at the time, apart from hearing a story about a sister of a friend who was “allergic to being pregnant”. Her mother, Biddy, hadn’t heard about it either.

“HG never stopped until I had my daughter,” she recalls.
Priscilla was first admitted to hospital when she was seven and a half weeks pregnant. At this stage, she couldn’t eat anything without vomiting it straight back up. Around Christmas week, she had got so weak she couldn’t sit up and started speaking in a nonsensical manner.

Describing it as “morning, noon and night sickness”, she attended her GP and ended up being hospitalised from December 27, 2003 until January 13, 2014 at University Hospital Galway (UHG), where she couldn’t eat a morsel of food.

She travelled to UHG with a black scarf tied around her head to keep the sunlight out of her eyes. Her husband Kevin declared at the time, “everyone will think I have kidnapped you and you are trying now to escape”.

When they got to UHG, Kevin kept propping her up on a chair in the waiting room as she continued to fall to one side. At this stage, she couldn’t stand daylight, tolerate any kind of noise or even swallow her own saliva.

“It didn’t matter whether I ate something or didn’t, I threw up anyway. Smells, food, moving, television, everything would set me off.

“The worst part of HG is the emotional damage and the isolation. While some of the symptoms may be similar to morning sickness, there is no comparison between HG and morning sickness.

“My kidneys threatened to fail and doctors were considering putting a tube up my nose and feeding me directly into my stomach. I would have died if I didn’t have my parents and Kevin. I used to wake from my sleep to get sick.

“Kevin couldn’t cook or eat while I was in the house. I tasted food twice – when I was eating it and when it came back up,” she recalls.
HG was officially confirmed as the cause by a consultant gynaecologist at the end of January.

During her first hospital stint, she lost a stone in weight and three and a half stone in three months. She can joke now that she was probably lighter when she was nine months pregnant than what she is now, but it was no laughing matter at the time. Her diagnosis wasn’t of any real assistance to her because no medic could guarantee when her condition would end. For some people it can last 14 or 20 weeks, or some can experience it throughout their pregnancy.

She describes HG as the “worst type of food poisoning”, which lasted in her case for 37 and half weeks, around the clock.
The only relief she got was while she was on a drip in hospital, when she didn’t feel so dehydrated. However, even this couldn’t stop her from getting sick. Vitamins and minerals were also administered through a drip and her blood pressure was dangerously low on several occasions.

Her veins used to collapse from dehydration, which made it extremely difficult to find a vein to facilitate the drip and left her black and blue from multiple insertions. “The repercussions of HG are long lasting. For two or three years afterwards my stomach was in bits and I was medicated for a long time. I lost a lot of my so-called friends, who felt ‘I should get on with things’.

“I dare anyone to survive a week of what I put up with for 37 and a half weeks and say it is nothing major. I found out I was a CF carrier while I was pregnant. Anything that could go wrong, did go wrong.”

According to official statistics, any HG survivor has a 70 to 75% risk of having it on a subsequent pregnancy and would have to endure an even worse form every time. “I know women with HG who have had abortions because of the sickness. I am against abortion but I can understand why a woman would do this.

“HG is life-limiting, isolating, depressing, scary and degrading. I remember getting a prescription from the hospital when I was six months pregnant. While I was in the pharmacy getting the medication I could see the pharmacist, who was on the phone looking at me, panicking.

“She couldn’t understand that a woman who was six months pregnant would be given this medication. But it was a lesser of two evils, either I died or the baby died.

“If HG is caught early enough, you don’t develop into the cycle of getting dehydrated and the more dehydrated you become, the sicker you get. It turns into a vicious circle,” she continued.
If Priscilla had known earlier that she had HG, she wouldn’t have fought it for as long as she did and could have sought help sooner, which may have reduced the serious impact of the condition.
Following her initial sickness, Priscilla didn’t work for about five months and returned at the end of May because she was only getting sick “eight or nine times a day instead of 20 or 30 times”.

She worked for a few days but once she returned to the hospital for an appointment, she wasn’t allowed home.

She believes that medical professionals need to become more educated about the impact of the condition.

She admits Kevin’s life was also put on hold, as it consisted of getting up to work, coming home, tidying up or going up to Galway to visit her in hospital, where she might not even want to talk to him because her headaches were so bad.

“There were days when Kevin thought I was going to die, particularly when I would be in hospital for five or six days and I would be no better at the end of it.

“The hospital wouldn’t let me home without eating something. I would eat before I left the room and have it thrown up before I got to the car park,” she recalls.

“When you have a lovely healthy baby, you go ‘oh my God, how did I think these things’. I never thought about having a baby, I thought about the sickness ending.

“My father John often brought me to a clinic appointment in the campervan so I could lie down on the bed while he was driving.”
Priscilla was offered no counselling after the birth of Sophie. The joke among HG survivors is “have you been gingered yet”, as drinking ginger tea is cited as a possible cure for morning sickness but it doesn’t help alleviate HG in any way.

Priscilla has a friend who got HG during her second pregnancy. Her husband contacted her asking for advice on what he could do. She advised him to “do nothing, say even less, empty the bucket and look after his wife as best as he could” because she knew there was nothing he or doctors could do to take it away.

“If I lived in a third-world country, I would be dead, I would not have survived it. If I was seven stone and lost three stone, I would have died. Women with HG can’t help it.
“We hear stories about women who died in childbirth and pregnancy 50 or 60 years ago. They suffered from conditions like HG but nobody knew what they had,” she concluded.

If you, or someone you know, is affected by HG, support is available online at Facebook under Hyperemesis Support Group of Ireland, at www.helpher.org, or at www.pregnancysicknesssupport.org.uk.