Home » Lifestyle » A lifetime of cocooning for Poor Clares 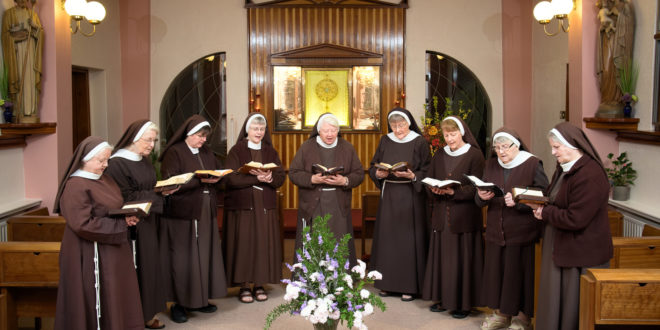 COCOONING and leaving home only in limited circumstances is a new phenomenon in Ireland due to the Covid 19 pandemic, but it is a way of life for members of the Poor Clares’ community in Ennis.

The nine sisters are engaged in daily prayer and contemplation and go outside of the walls of their Francis Street convent only for medical appointment or attend courses relating to their vocation or social issue. In earlier times, once a young woman joined the Poor Clares she remained in cloister for her entire life.

“We have a constant quite atmosphere here in the convent but do not have a vow of silence,” said Abbess Bernardine Meskell. After five years as boarder at St Joseph’s Convent in Spanish Point, the Castleconnell, County Limerick woman joined the order in Ennis in 1963.

“Our day is full, broken into seven different ceremonies, such as mass celebrated by one of the friars, morning and evening Divine Office and prayer several times. Mass and Benediction is held on Sundays. On top of that we work in the house and refectory and the garden. A very good friend of ours also works in the garden and does some maintenance,” she said.

In recent times, a new dimension to the Poor Clares’ routine of prayer is by way of IT.

“I never thought we would see the day when the liturgy would be coming to us by webcam from the Cathedral. Bishop Fintan Monahan and parish priest Fr Tom Ryan are very good to us; they reach out in prayer and this is welcome and appreciated by our community. Fr Tom has led a mission for us and never losses an opportunity to promote us,” said Sr Bernardine.

In the past, access to radio or TV was very much curtailed but nowadays the sisters are up to speed with the world all around them.

“After tea we look at the Six One news and have a chat. We have a free week at Christmas and Easter when we can relax a bit more,” she said.

Sr Bernardine said they are very much aware of how difficult it is for people all over the world in this time of unprecedented crisis and praying for them is very important.

“We get phone calls or visits to the here, in good times and bad, from people who want us to pray for them for some reason or other. There has been a big increase in the number of people contacting us and asking for prayers in this past while. People have great faith in our prayers to help fix their problems.

“We have a sense of responsibility for people we pray for and have their intentions in our heart,” she added.

Sr Bernardine said they had been overwhelmed by the level of practical support from the public since the Covid 19 restrictions were introduced.

“People are bringing food for us; they feel a need to look after us and make sure we don’t run short of anything. This is wonderful. They’ll phone ahead to say they have something; non-perishable food mainly, but we’ve also got gloves, plastic bags and even birdseed for our garden visitors. It’s left for collection at the front door,” she said.

People who visit the Poor Clares convent are met at the reception by Sr Catherine, who is known as the portress. She can deal directly with callers or take messages to be addressed later.

Sometimes, people can come in to talk face to face with one of the sisters, as Sr Bernardine explained.  “In particular situations, people do come into a parlour to meet us; to talk about problems and we provide a sympathetic listening ear,” she said.

As regards anybody paying a social visit to the convent or being invited to dinner or tea, that’s out of the question.

Sr Bernardine said, “The only outsiders that can be invited to the convent are a head of state or bishop. President Éamon de Valera was a regular visitor; it was usually on August 15, which was the day of the county show, and President Mary McAleese has visited us in an official and private capacity.

“Our visitors now are Bishop Fintan Monahan and retired bishop Willie Walsh. They are great friends. Michael D Higgins has yet to call.”

Outlining the history of the Poor Clares in Ennis, Sr Bernardine said, “We arrived here in October 1958, on the invitation of Bishop Joseph Rodgers. A local man central to this was solicitor Ignatius Houlihan, who continued to support us throughout his life. Mother Agnes came from Cork to establish the foundation, but she died in 1960 and on Wednesday we marked her anniversary with a special ceremony, which included reading an account of her life. She was the first nun to be buried in our cemetery.

“Another two sisters who were among the first to arrive in Ennis were Abbess Delerosa Carroll and Mother Angela Whelan, both of whom are deceased. Angela’s sister still lives in Shannon.

“Former Abbess Sr Bernadette Caughlan also came to Ennis as part of the first group and she is going strong, thank God. It is good that she can be a part of the ceremony to honour her friend, Mother Agnes.”

The Ennis Poor Clares established a new foundation in New Guinea in 1971 and the convent has connections with people all over the world.