Home » Sports » A first under 14 A title for Clooney-Quin 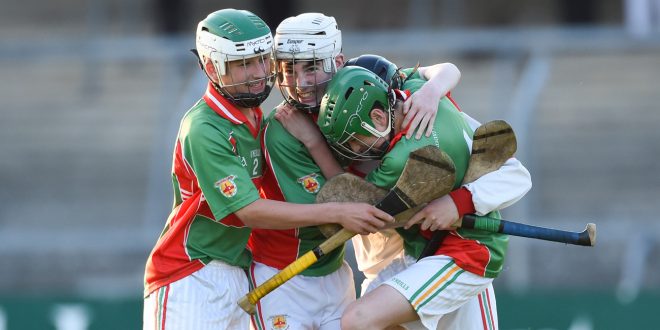 A first under 14 A title for Clooney-Quin

History was made at Cusack Park this Friday evening when Clooney-Quin won the under 14 A Clare hurling championship for the first time, beating a fancied Sixmilebridge team in the process.

On their way to winning the Clare feile na nGael title two weeks ago, Sixmilebridge had pipped Clooney-Quin and they went into this evening’s final carrying the favourites tag.

Clooney-Quin took control from the start and raced into a 0-3 to 0-0 lead before Sixmilebridge opened their account. The winners, however, dictated matters and led 0-8 to 0-1 with just nine minutes played.

Sixmilebridge received a great boost in the twentieth minute when David Kennedy struck for a goal but within a minute Clooney-Quin had replied with a like score from their full forward Shane Harrisson and they went on to lead by nine points at half time when the score was 1-10 to 1-1.

The winners had the first score of the second half but then the Bridge hit three unanswered points as they piled on the pressure but these s cores were cancelled out in the tenth minute when Harrisson struck for his second goal.

To their credit Sixmilebridge battled on but they simply could not break down a well organised and balanced Clooney-Quin outfit all of whose tally on the evening came from play.

After the game Joe Pender on behalf of the underage hurling board presented the cup to the winning captain Colm Cassidy.