Home » Lifestyle » A feast of music at Fleadh 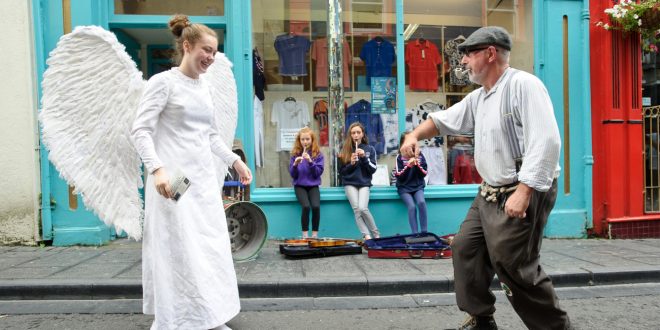 Heavens Above....Street performer Kevin Cuniffe of Ballinasloe is joined by "Angel" Neidin Mooney of Ennis for a performance during Fleadh Cheoil na hEireann in Ennis. Photograph by John Kelly.

A feast of music at Fleadh

A huge number of people  are descending on Ennis  today (Thursday), ahead of the main competitive events that will determine who will take All-Ireland titles across 180 categories.

The Fleadh Cheoil organising committee estimate in the region of 30,000 to 35,000 people attended the opening day events on Sunday, including 12,000 at the opening ceremony, the Boffin to Burren concert at Glór, the Tulla Céilí Band at Cois na hAbhna, the luminarium, aifreann traidisiúnta, the Gig Rig and evening pub sessions, as well as performers, volunteers, stage crews, security, TV crews and other service providers.

This figure is expected to increase exponentially from today, with the influx of 6,000 competitors, their families and friends, as well as visitors and music and dancing enthusiasts.

With this surge, gardaí are anticipating that opportunistic crime such as pickpocketing will occur and are advising the public to be mindful of this, particularly in large gatherings of people.

Clare’s Garda Chief Superintendent John Kerin warned, “The real type of crime that concerns us is the possibility of organised pickpocket gangs targeting the town, especially around the gig areas where large crowds frequent”.

Gardaí are maintaining a visual presence throughout the town and he said members have been briefed on people living in neighbouring counties in particular who have been involved in this kind of crime previously. Chief Superintendent Kerin said crime has been low due to their visible presence and, up to Wednesday, 14 arrests had been made, the majority of which were for minor offences, such as public order incidents.

Meanwhile, businesses in the town are anticipating a surge in spending as activities intensify this weekend.
Ennis Chamber CEO Rita McInerney said the Fleadh is already having an impact but is encouraging locals not to be “scared away” from doing business in Ennis.

She noted retailers have extended hours to ensure normal business can be conducted during the Fleadh, with many shops open until 8pm up to Friday and 7pm on Saturday. They are also open on Sunday. Certain sectors will benefit more than others, she said, noting food outlets in particular will reap rewards.

More than 100 local entrants are tuning up to display their talents across the 180 competitions, which get underway from Friday. With 79 solos from the Banner County, plus a further 26 competing in bands, groups, sets, duets and trios, the All-Ireland titles are sure to roll in.

The concert programme will also step up a notch today, as the first of the four Fleadh TV four-hour open air concerts begin at 8.30pm.

As more people flood into the town, the demand for tickets has grown with it and concerts continue to sell out. The Meitheal Orchestra and the Trí Tones Concert has sold out, as has the overseas reception and concert with the Kilfenora Céilí Band and Seán Keane on Friday. The concert with Stockton’s Wing and Maura O’Connell on Saturday has also reached capacity.