Home » Sports » A fair outcome to a tremendous contest 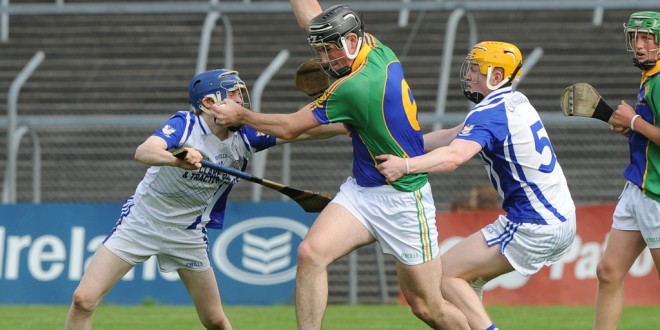 Feakle's Con Smyth was at centre back for St. Josephs Tulla in their clash with Colaiste Chriost Ri; Photograph by John Kelly.

A fair outcome to a tremendous contest

St. Josephs Tulla and Colaiste Chriost Ri, Cork will have to do it all again after they ended level in the Munster colleges senior B hurling championship semi-final at Ballyagran on Saturday afternoon.

On a day when there was some excellent hurling, extra time failed to separate the teams

While both sides can point to missed opportunities, a draw was a fair outcome to a contest played in extremely difficult weather conditions.

Players had to contend with showers of sleet, a tricky wind and biting cold. Indeed, five minutes into the second half, referee Richard Moloney, rightly, suspended play during a heavy shower of hailstones. After a five minute delay the game resumed and huge credit must go to all involved for the marvellous entertainment provided.

The Cork side made the better start and raced into a six point lead, 1-3 to 0-0, by the end of the first quarter. It didn’t look good for the Clare side who had missed a couple of glorious chances in the early minutes.

Slowly but surely, Tulla got a grip on proceedings and they hit five unanswered points to come to within a point of their opponents as the half time whistle sounded.

At half time Chriost Ri held a two point lead, 1-4 to 0-5 but this was wiped out within two minutes of the resumption thanks to scores from Brian Fahy and Gary Cooney.

Play was then suspended for five minutes during a shower of hail and when the action resumed Tulla took up where they had left off and Brian Fahy fired them into the lead for the first time.

From here to the finish it was point for point with the Cork students bringing the game to extra time when Alan O’Callaghan, who was outstanding on the day, converted a 50m free with two minutes of ‘injury time’ played. .

Prior to this s core, the Cork side had failed to score from three frees in a matter of four minutes.

The Clare students dominated the early stages of extra time and went three points clear with scores from Darren Chaplin, Martin Daly and Gary Cooney. As the first period of extra time went into extra time, Chriost Ri were awarded a 20m free and their star player O’Callaghan rifled the ball to the roof of the net to level the tie yet again, 0-14 to 2-8.

O’Callaghan who hit 1-6 from frees on the day, put them ahead two minutes into the second period but Tulla refused to give in and two minutes from time Darren Chaplin fired home the leveller.

Meanwhile, holders Ard Scoil Ris were knocked out of the Dr. Harty cup (Munster colleges senior A hurling) by Rochestown College at Charleville on  a final scoreline of 4-11 to 1-17. In the final the Cork side will face Thurles CBS who had a narrow win over Castletroy at Toomevara