Home » Regional » West Clare » A dozen As for Kildysart student 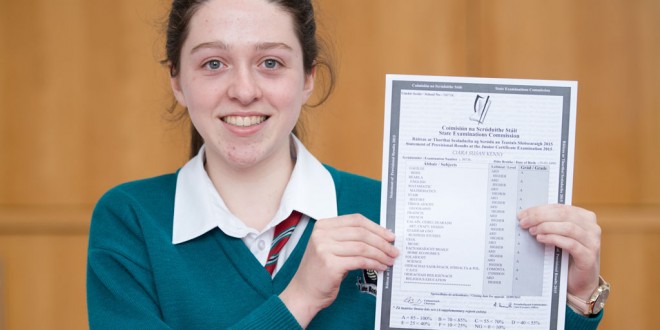 A dozen As for Kildysart student

THE vice-principal of St John Bosco Community College, Kildysart said the school is “absolutely delighted” that one of its students was among the highest achievers nationwide in the Junior Cert.

Sixteen-year-old Ciara Kenny secured 12 As and Deirdre Convey said while the school is very pleased for Ciara, it is very happy with the results “across the board”.

Ms Convey said Ciara is an “excellent student”, who excels both in academic and extra-curricular subjects.

“Ciara was a winner in the Féile na hInse competition and she participates in the girls’ basketball team,” Ms Convey said.

“She was also a member of the Green Schools Committee, which won two green flags last year and she took part in the young environmentalist competition last year and was one of the group who got to the Mansion House.”

Ms Convey said overall the students in the Kildysart-based school did very well and were supported in their endeavours by the “committed and dedicated” staff at St John Bosco Community College.

“I’ve taught a lot of Irish and a large number of students took honours Irish and all of them got honours at higher level, which was great. There were no Ds and a good few got As and Bs, so we’re delighted with that,” she said.

“We’re very happy across the board. All of our students were successful and we did very well in English and maths. The school’s ethos is to [promote] a holistic education and encourage students to get involved in as many activities as possible. The class sizes are also small and our students get plenty of attention.”

Speaking to The Clare Champion, Ciara said she was still taking it in that she was among the top five or six Junior Cert students in Ireland. Ciara said she had been pleased with how the exams went in June but was surprised by the level of her success.

The talented teenager said home economics and art are among her favourite subjects and she is happy that she had been able to combine her academic work and her extra-curricular activities.

She said it was sometimes difficult to balance academic and extra-curricular activities but said, “I could be very busy during the week doing extra-curricular things and when I was, I would do extra study at the weekends”.

Ciara, who is currently in fifth year, said she would like to go on to third-level and study to be a primary school teacher after she does her Leaving Cert in June 2017.

She said she planned to celebrate her remarkable achievement on Wednesday evening by going to a teenage disco in Ennis with friends.
“Everyone is kind of relieved to have the results now,” she said. “I can’t believe it; it still hasn’t sunk in.”