Home » Regional » Ennis » 50 years of the Soroptimists in Ennis 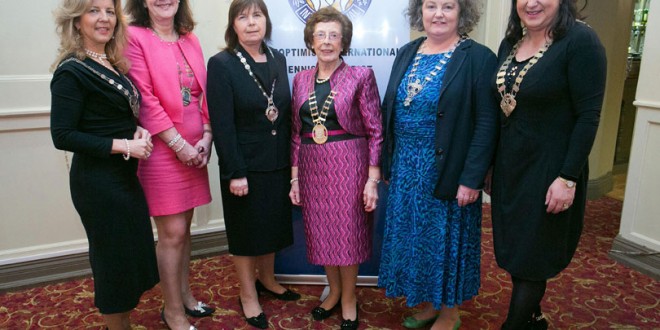 50 years of the Soroptimists in Ennis

SUPPORTING an amazing 55 charities since its foundation in 1964, the Ennis and District Soroptimist Club have been at the forefront of charitable fundraising for five decades.

A celebration of the 50th anniversary of the organisation was held in Ennis at the weekend, with current president Deirdre Power O’Donnell describing it as a “wonderful occasion.”

Guest speaker at the event in the Old Ground Hotel was Minister of State for Housing and Planning Jan O’Sullivan, with an address by Soroptimist National President Noreen Walshe. There were attendances not only from local members, past and present, but also representatives from ten other Soroptimist clubs around Ireland.

Deirdre, daughter of founding member Maura Power, recalled how her mother and the other founders Peg Ruttle, Tras Honan, Marie O’Gorman and Ann O’Driscoll started the organisation 50 years ago.
And she said that the spirit that encouraged the founders to work for the good of the local community continues on in the organisation’s current membership.

The organisation was initially founded in Ennis to raise money for a school for children with special needs. Those initial efforts resulted in the establishment of St Clare’s school, with coffee mornings run to pay the salary of the special needs teachers which was eventually taken over by the Department of Education.

“I was a child growing up with the Soroptimists and I saw first hand the amazing work they did. They were great women, they worked hard and helped to grow the club into what it has become today. It is a fantastic organisation that does a lot of good, it has helped 55 charities over the years and our members work very hard and are committed to fundraising,” she said.

The membership of the club continued to grow and the number of causes and charities widened. In the establishment of the club the founding members were greatly supported and encouraged by the Limerick Soroptimist club.

Over the last 50 years a number of our members have served as national presidents of the Soroptimist Association of the Republic of Ireland. They have also spear headed national projects, with one of the proudest moments for the local organisation being the the founding of the Caring for Carers project. This is now an autonomous organisation with still many links into the greater national Soroptimist Association.

Other highlights for the club included receiving Laureate of Women of Europe Award by the Irish Council of the European Movement. This nomination was made in recognition of the voluntary efforts of the Ennis members at Irish and European level. Long serving member Judith Ironside, who identified the need to support those who face the burden of caring for the elderly or infirm at home and who inspired the foundation of the Caring for Carers organisation collected the award on behalf of our club.

The Ennis club is still championing causes both locally and at national level. They have recently completed another very successful project, 65 Roses, in aid of Cystic Fibrosis. The club has grown in its 50 years of fundraising and friendship with a current membership of 41 making it one of the bigger clubs.