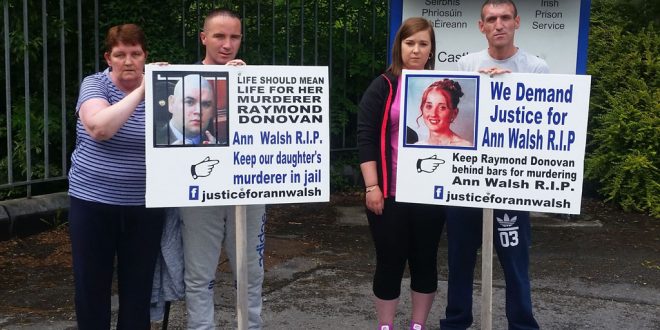 Members of the Kelly family protesting outside Castlerea Prison.

A KILRUSH family travelled to Castlerea Prison in Roscommon on this week to protest against the possibility that the man convicted of murdering Ann Walsh 11 years ago, could be in line for parole.

The Walsh family, from Pella Road in the town, are planning to travel to the prison again on Thursday, June 30 for a second protest over the possible release of Raymond Donovan from Cooraclare, who was convicted at the Central Criminal Court in Ennis of the murder of his former girlfriend.

Mr Justice Paul Carney imposed a mandatory life sentence on Donovan, then 24, after the jury delivered a unanimous guilty verdict in the 2006 case.

He was found guilty of strangling 23-year-old Ann Walsh in the grounds of St Senan’s Church, Kilrush on August 24, 2005.

The Walsh family learned on March 3 that Raymond Donovan was planning to apply for parole for a second time. He was turned down three years ago.

They have since launched an online petition against his possible parole and say that it has been signed by approximately 1,000 people.

“We got advice from a solicitor before the protest. We were told we could have a protest, once it was peaceful,” Stephen Walsh, Ann’s younger brother, told The Clare Champion this week.

“He was up for parole when he had served seven years but he was refused. They have let him out twice to see his father because his father isn’t able to travel,” he added.

Ann Walsh’s mother, also Ann, was told in early March that her daughter’s murderer would be applying for possible parole in June. She found out through the Irish Council for Civil Liberties, who put her in touch with the parole board.

“They told us that he was up for parole in June,” Ms Walsh confirmed.

Stephen Walsh accepts that Donovan will be freed at some point but he feels that it should be many years from now.

“They reckon that maybe he could be put into an open prison but, for the way he killed Ann, he should do life. Life should mean life. There is going to be a time when he will get out. He can go home and see his mother and father. He can get on with life. We are never going to see Ann again. She’s gone.

“She has missed out on so much in life. She should be here now with her own kids, enjoying life. He took that from her,” he reflected.

The eldest child, her mother says she will never get over Ann’s death while, to this day, her father Stephen visits her grave twice or three times a day.

“It’s very hard to cope. You never get over it. When I heard then that Donovan might be up for parole, that made it worse. I’ll never get over this. I couldn’t. She was full of life and was a great girl. We were going on a holiday on August 27 that year. She was murdered on August 24. He gave her a brutal death,” Ms Walsh said.

She remembers vividly how she was told that her daughter was dead.

“I heard a knock at the door. I asked who was there and they said they were two gardaí. They told me that my daughter had an accident.

“I asked how did they know it was Ann? The garda said he knew her,” she explained.Ann Walsh was killed on the grounds of Kilrush parish church. It took a long time before her mother ventured into the grounds.

“I couldn’t go in there. It took me about a year and a half. It was like as if she was calling me. Every time I have seen her, she has been smiling. She got an awful death. He didn’t show one bit of remorse,” her mother Ann stated.

Ideally, the family would like if they were given permission to erect a light where their daughter and sister died.

“In the winter it’s dark and dreary. The least she deserves is a light in there. We wanted to pay for it ourselves but we haven’t been allowed yet. There is a pole that can be tapped into,” Stephen Walsh explained.

He was 16 when his sister was killed and says that he finds it very difficult to move on.

“The three of us were going on holidays that Saturday. I have kids that Ann should be sitting down playing with and bringing them places. You’d always think of what she would be like now. She was 23 years and four months when she was killed. We can never move on. People say that, as time moves on, you get over it. You never get over this. The only way you’ll get over it is when you’re gone yourself,” he feels.

His mother believes that she sees Ann from time to time.

“After Ann got murdered, I could see her everywhere in the house and I could smell her perfume. I always know she’s there. She came to me the other day before we went up to the prison and she was smiling. People tell me I’m hallucinating but I know that Ann is there. You’d never expect to lose one of your children, not in that way anyway. You’d always expect that you would go first.”

McNamara criticises uses of perspex for visitors in nursing homes