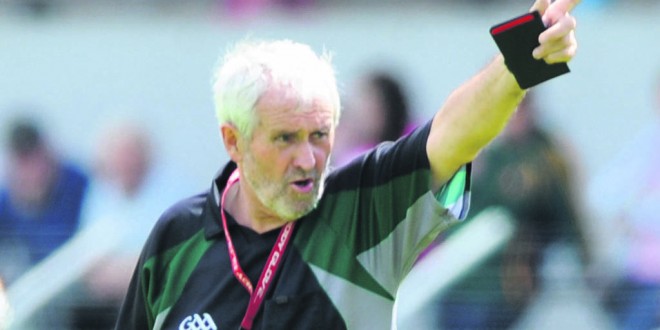 3,000 games and still counting for Flan

August 2, 2014, was a special day in the life of GAA referee Flan O’Reilly. When he travelled to Clonlara to take charge of the Intermediate Hurling Championship tie between Smith O’Brien’s and Meelick, he knew it was a landmark game in his refereeing career.
Saturday’s outing marked Flan’s 3,000th match as ‘the man in the middle’.

“I had refereed a number of games for the South Clare Divisional Board in 1992 before I started to keep a record. The first game that I recorded was a junior hurling fixture between Sixmilebridge and Parteen in early 1993. It ended in a draw,” the Cratloe clubman told The Clare Champion this week.

Having reached this significant milestone in his refereeing career, Flan said he has no plans to retire. In fact, since taking charge of his 3000th match, he has refereed another couple of games and as he spoke on Wednesday, he was preparing for another assignment later that evening.

“Jim Enright, a fellow Cratloe club member, was an officer with the south board at the time and he suggested that I take on the role of referee and I readily agreed. I have been refereeing at both codes since then,” said Flan, who attended his first refereeing course in 1992.
A native of Lisheen, Ballynacally, Flan played football with his native Clondegad and hurling with Ballyea for many years. He won a Clare Junior Football Championship medal with Clondegad in 1969. He recalled “a significant win” for Clondegad in 1966 “when we beat Lissycasey in a junior football decider”.
A few years after setting up home in Cratloe, Flan threw in his lot with the South East Clare club and has served in many capacities since then. He played hurling with the club, “We lost two intermediate Clare finals, to Tulla and to Kilmaley, who beat us by the minimum margin and went on to win a senior Clare title a few years later,” he remembered.

Flan played at midfield for Cratloe on those occasions. With regard to refereeing, Flan believes all games are significant. “I see my role as being involved as little as possible, as the players determine what happens on the field of play. If players want to play, a referee’s job is very easy.”

O’Reilly gets as much enjoyment out of refereeing a juvenile game as he would from an adult fixture. They are all important to the players involved.
Regarding particular highlights from his refereeing career, he said, “I recall a junior final between Wolfe Tones and O’Callaghan’s Mills in Sixmilebridge, I really enjoyed being involved in that fixture as the lead changed hands so often with, first one and then the other, having the upperhand”.

Flan is regularly asked to take charge of school games. “They are usually staged around lunch-time and I try, as far as possible, to be available when asked for these.”

He has seen many skillful players at this level who went on to stand out at county level. “I often communicate with people involved about players who impress at schools level,” he added.

What is the secret to being able to continue refereeing for so long? “I have been fortunate to avoid injury and I find that refereeing is easier now, as I have much more experience dealing with players. The most difficult period for any referee are the first couple of years,” he said, before paying tribute to the “reliable group of officials who have been with me over many years. They enjoy the matches as well, although standing at a post for an hour can be demanding on the mind”.

He particularly recalled the late Joe Ward and the late Jim ‘Benjy’ Browne. Flan also had a special word for Flan McNamara who “has given up to 50 years duty as a referee and umpire”.

Flan O’Reilly is a GAA man through and through and served as club secretary with his native Clondegad and his adopted Cratloe. He was also chairman with Ballyea. He has helped Cratloe to a number of All-Ireland quiz titles over the years too.

One match that isn’t included in Flan’s ‘official list’ of 3,000 is the very first game he refereed. “It was a camogie game between Lisheen and Kildysart in 1968 and I agreed to take charge at the request of the late Micko Griffin from Ballynacally, a long time official of Clondegad GAA. I remember the match for a number of reasons. The Kildysart goalie in that game was Mary O’Connell and while I did not know her at the time, we later met and she is now my wife. She has been a great support since I took up refereeing officially in 1993,” he concluded.