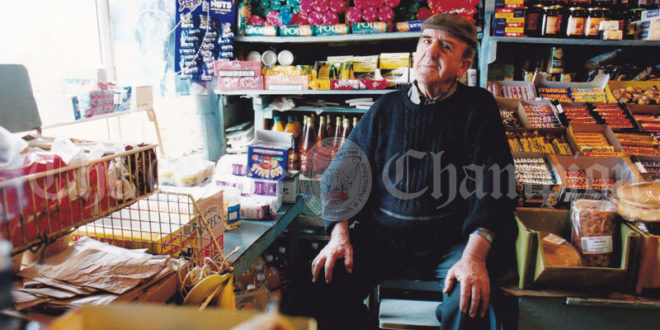 Tom McNamara behind the counter of his shop in Cooraclare village. Photograph by John Kelly

A look back at some of the photographs from our March 24, 2000 issue

Paddy Fitzgerald, Clifden, bring in the cattle near the Mill Stream, Corofin this week. Photograph by Eamon Ward

At the presentation of a trip to see Celtic play Dundee on April 15 from El Paso, (sponsors) to Gerard Arthur, Newmarket-on-Fergus were from left Des Monaghan, Ailish and Ronan Authur, and John White, Manager of El Paso. Photograph by Eamon Ward

Aoife Healy, left, who was the star of Clare’s league win over Cork.

Ger Quinlan will be hoping to help Clare win the midfield battle against Fermanagh in Saturday’s vital league tie in Kilmihil.

Tralee’s Niall Clifford gets to grips with Sean McKeogh of St Flannan’s during the Corn Ui Mhuiri Final in Kilmallock. Photograph by John Kelly

St Flannan’s Eoin Curtin gets away from Tralee’s Niall Clifford during the Corn Ui Mhuiri fianl in Kilmallock. Photograph by John Kelly

Hotel/catering and Tourism Tutor, catriona Gannon and LCA 1 student Adrian Downes in the kitchen at the VEC Youthreach in Miltown Malbay.

Ennis Lions Club members contributed to the recent Bothar airlift of 70 in-calf heifers from Shannon Airport to 70 peasant families in Albania. This was Bothar’s third airlift of Irish heifers to Albania since September 1999. Pictured before the airlift were ( from left) Ennis Lions Club mermbers Tom Mannion and John Costelloe, Danny Coyle handing over cheque to T.J. Maher, chairman of Bothar and Terence Mangan, also of the Ennis Lions Club. Bothar is the Third World aid agency that specialises in the use of livestock in development aid.

LCA 1 student Tom Pender takes a break from Literacy class to join his tutor margaret walsh for some guitar playing at the VEC Youthreach Centre.

Collette Downes, being made up by Sharon Murray for ‘My Fair Lady’.

Tom McNamara behind the counter of his shop in Cooraclare village. Photograph by John Kelly

Shoppers stop for a leisurely chat in Miltown Malbay. Photograph by John Kelly

Time for a chat…. Frances Grogan, Cooraclare, stops for a chat with Kay Breen while out for a walk with her dog ‘Benji’. Photograph by John Kelly

Michael O’Shea of Clare gets away from Cork’s Derek Kavanagh during the Under-21 Championship first round game at Kilmallock. Photograph by John Kelly

Aerial action from Liam Collins of Cork and John Paul O’Neill of Clare during the Under-21 Championship first round game at Kilmallock. Photograph by John Kelly

Clare’s Paul Hehir and Graham Canty of Cork contest the ball during the Under-21 Championship first round game at Kilmallock. Photograph by John Kelly.

Busy working on their glass projects at the VEC Youthreach Centre in Miltown Malbay ar Austin Kinnane and Noel Mullane and their tutor Sarah Moore. Photograph by John Kelly

Superintentendent Sean Corcoran of Killaloe with the weapons which were found by Gardai during a serach of Hurdlestown House in Broadford. Photograph by John Kelly

LCA 1 student Claire Honan getting to grips with the computer system at the Youthreach Centre. Photograph by John Kelly 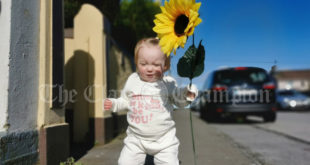 Here is a selection of the fantastic entries to our 2km from home photo competition.