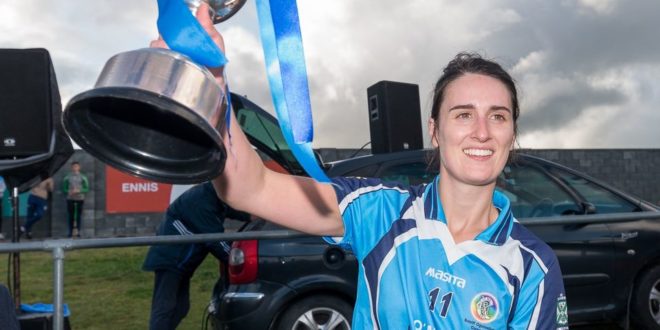 2020 Clare Senior Camogie Finalists To Be Decided This Weekend

The line up for this year’s Clare senior camogie decider will be decided this weekend with a brilliant double header of semi-final action in store at Fr McNamara Park.

Joint Clare junior camogie manager Ann-Marie McGann looks ahead to what will be two high quality games in the race for the McMahon Cup.

Like true champions, Scariff-Ogonnelloe have weathered the storm they have faced since losing to Inagh-Kilnamona in the earlier rounds, and they deserve to now be back into the semi-finals. They have proven they have the ability to dig deep when it is needed and this game will be no different. There is a real sense that this game will won by sheer determination and grit and who will hold their nerve. Things can go against you in games so it could well boil down to which team is able to keep their shape and stick to the plan if something goes against them.

Newmarket will want to exact revenge for last year’s defeat and they had a bit of a slip up in their group this year. I think that will have opened their eyes that complacency cannot be accepted at any stage. Scariff-Ogonnelloe might have a slightly better balance to their team and a greater scoring power, but you just cannot beat experience which Newmarket have in spades.

Newmarket have lost some key players in the likes of Niki Kaiser, but they have added some of their younger contingent to the senior set up this year and that has been a real positive for them. Their scoring rate has been really strong and they have been getting in for goals which is something they will look to build on. They have also had a good spread of scorers and a really clinical free taker in Áine O’Brien.

A concern for Scariff-Ogonnelloe might be that Mairead Scanlan has not had the same influence on games that we have seen in previous years. They really need her to return to form in open play because that threat she poses makes her one of the best forwards in the county. That being said, they have a great balance across the team from Susan Daly at full-back right up to Marian Rodgers at full-forward and that has been key to their success. Amy Barrett has also been a real star for them this year. I saw her against Truagh-Clonlara and I felt the amount of dogged work she got through really was central to them having that platform to go and win the game. It can sometimes go unnoticed but those hard yards can turn games.

I hate sitting on the fence but this game is so tight to call. Scariff-Ogonnelloe have been sloppy at times but are still back at the semi-final stage. They carry the favorites tag but experience counts for so much in games like this. Newmarket have been fiery in some of their games and there have been moments where concentration levels have dropped a little bit. That cannot happen here because it will take a huge effort to get over the line.

If I had to call it, the Scariff-Ogonnelloe half-back line could be a vital area and if they can get on top, I think they might just have enough to come through a real test.

We have seen some fine performances from Kilmaley in the championship and Inagh-Kilnamona will know that they cannot take anything for granted here. Kilmaley will be happy to be in the semi-final having struggled in recent years but they won’t be resting on their laurels either and will be eager to prove that they are entitled to be here.

Inagh-Kilnamona set out their intentions early in the championship in the manner in which they beat Truagh-Clonlara. Now that they are here, they would gladly take a one point win and get back to the county final once more, so I expect them to go all guns blazing for this one.

Kilmaley will carry confidence into this game with the amount of scoring they have been doing up to now, and a criticism of them in recent times has been how reliant they were on Claire McMahon to get their scores. They have adressed that this year with the likes of Chloe Neylon proving to be a real goal threat. She is a serious danger around the square and will take watching. Caoimhe Carmody is chipping in with plenty scores too but the most consistent player across the whole championship has been Niamh O’Dea who has been outstanding and she makes such a difference to their team.

One factor for Kilmaley has been that they are not making changes soon enough in games and they could well have been closer to Newmarket the last day if they had moved that bit quicker. Grace Carmody is making a real impact when introduced but could do with more time on the field to hurt defences. It is the same with the likes of Eilis Cahill who is a real thorn for defences so that is something they need to address.

I think Inagh-Kilnamona are better this year. They have been excellent in previous years but I think they have improved even more. Their tackling is outstanding and their workrate is brilliant. They have such a depth of talent in the panel and having Aoife Keane back is a major plus for them. Their defence is rock solid and are yet to concede a goal.

They are going to meet a savage challenge here from their neighbours and if they get over the line, it will stand to them should they reach a final to have come through such a tough test. They have outstanding players and while everyone loves the underdog story, their experience and greater balance should see Inagh-Kilnamona run out winners.