Share
THE refurbishment of Ennis’ oldest building is set to cost Ennis Town Council €170,000, even though the building is not owned by the local authority.
According to town manager Ger Dollard, the McParland’s property on Parnell Street is “dangerous” and “deteriorating” and the owner of the property does not have the financial resources to make the building safe. Due to this, the local authority is obliged to make the structure safe.
He outlined that the refurbishment work is a matter of “urgency” saying, “the immediacy of this is real, we can’t afford to leave it another winter”.
The 16th century protected building is understood to be the oldest in Ennis, having a triple diamond Jacobean chimney.

In November 2009, a dangerous structure notice was issued by Ennis Town Council and scaffolding was erected to prevent parts of the building collapsing.
Mr Dollard told this week’s meeting of Ennis Town Council, “The council has been extremely concerned regarding the McParland’s property in Parnell Street, Ennis. Works to date have been undertaken by the council to render the building safe.
“It is clear, however, that the building has been deteriorating and the short-term measures put in place do not render the structure safe on a long-term basis.”
He explained the council has taken detailed professional advice and inputs have also been made by the National Monuments Service regarding the conservation of the property.
“It is clear also that the owner of the property, which has been occupied as a domestic dwelling, does not have the financial resources to make the building safe. In the above circumstances, Ennis Town Council under its statutory powers is obliged to make the structure safe,” he went on.
The works will involve demolition of the gable wall and chimney and their reconstruction. “These works will not return the property to a habitable state but will make the building structurally safe. Instructions have issued to commence this work in advance of the winter period,” he said.
The works are also necessary to avail of a grant of €85,000, which has been secured for the conservation of the property under the department’s Structures at Risk Scheme. The balance of funding will need to be further considered by the council, in conjunction with the owner of the property.
Councillor Paul O’Shea described the scaffolding surrounding the building as a “huge eyesore”. He asked Mr Dollard why the project was not put out to tender, with Mr Dollard replying he was happy that the local authority had complied with all of the guidelines.
Mr Dollard added that a new contractor would likely cost more than continuing with the contractor who installed the scaffolding.
Councillor Michael Guilfoyle expressed concerns about the amount of money that would be spent on the project.
“All we will be doing is reinstating what we are taking down. Unless you’re a crow that’s the only way you’ll see it,” he said.
Councillor Peter Considine stated that while the chimney is of historical importance, he questioned why the council should spend money on the restoration.
“Academically it might have importance but not for the ordinary person. There comes a time when you have to spend your money wisely,” he said.
Councillor Frankie Neylon argued that people’s safety passing the building must be considered. “What cost can you put on a life if a person gets injured there?”
Councillor Johnny Flynn stated the good work done in redeveloping Chapel Lane was “undid” by the structural instability of the building due to the “neglect by its owners”.
Councillor Tommy Brennan asked if the money spent by the council could be recouped if the building was ever sold. Mr Dollard informed him that the local authority is entitled to seek to recoup some of the cost.
Share 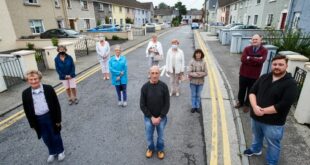