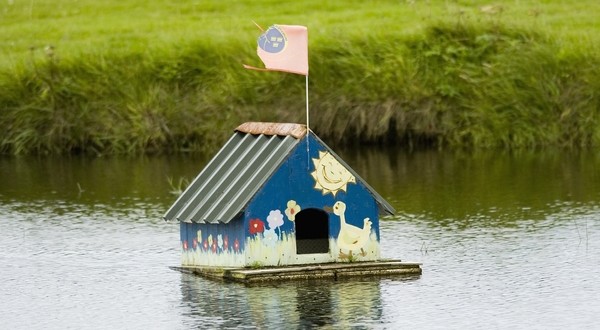 A well worn Munster flag on the vacant ducks' house at the new featured hole in Kilkee Golf corse. Phoptograph by John Kelly.

Almost three quarters of all homes in Liscannor were empty on Census night 2011, according to a Clare County Council report on vacant houses in the county. The local authority confirmed a housing vacancy rate of 21.2% in the County based on the most recent Census figures. It is the second highest in Munster and higher than the national average of 14.5%.

Over one third of homes in nine Clare villages were vacant on the night according to the figures and in six of these areas, more than half of all homes were empty. Villages with the highest vacancy rates were in the West Clare Municipal District. 85% of the county’s holiday homes are also located there.

The vacancy rate for the centre of Ennis is an average of 16%. The Shannon municipal district has some of the lowest vacancy rates in the county from 2% to 11%.

There are 11,782 vacant housing units in Clare, 4% of the national figure. The county has the fifth highest number of holiday homes in the country, behind Donegal, Kerry, County Cork and Wexford. There are 4,610 holiday homes here, 7.8% of the total number in the country. In Killaloe Municipal District the highest percentage (74.3%) of vacant dwellings that are holiday homes are in the Abbey Electoral District on the North Clare Coast. The second highest amount in the municipal district are in Carrowbaun near Killaloe.

Ennis has low numbers of holiday homes compared to the rest of the county, according to the report.

Vacant houses are ones which were clearly unoccupied with no furniture, cars outside and junk mail accumulating where as holiday homes are categorised as occasionally occupied. Houses under construction or derelict were not counted as part of the figures.

While the housing stock grew by 14% between 2006 and 2011 the vacancy rate increased by 1.1%. Clare County Council stated that the study will be considered during the review of the Clare County Development Plan commencing in January 2015.

Previous No GP Found for Feakle
Next Harmonious weekend in Ennis