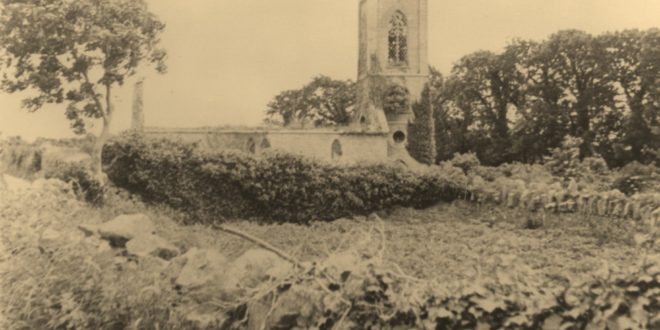 A LOCAL heritage group have made sure Covid-19 would not extinguish their plans to commemorate the 100th anniversary of the burning of a church in Clarecastle.
The Clarecastle & Ballyea Heritage & Wildlife Group had planned on marking the centenary of the attack on St Mary’s Church of Ireland back in April, however the plans had to be put on hold due to the pandemic.
The group have now reignited the commemoration, but instead of hosting an event they have produced an information brochure detailing the history of what has been described by local historian Dr Joe Power as a “shocking sectarian incident”.
Eric Shaw of the Clarecastle & Ballyea Heritage & Wildlife Group, who compiled the publication told us, “The burning of the church is an event not known to the younger generation here or to newcomers to Clarecastle in more recent times. The burning marked a turbulent time in our local history. Nothing remains of the building. The brochure is simply to mark the event as part of Heritage Week 2020.”
The booklet includes details of the incident written by Dr Power, a photograph of the church courtesy of Paddy Murphy alongside architectural drawings of what it would have looked like from the Representative Church Body Library.
The church at Clare Hill was destroyed on April 17, 1920 during the War of Independence. According to Dr Power’s history the attack was not sanctioned by Sinn Fein or by the IRA but was carried out by some local disaffected republicans. The Saturday Record described the malicious burning at Clare Castle as follows: “This dastardly outrage condemned alike by Protestants and Catholics was perpetrated on Sunday morning when the Protestant church was burnt to the ground. A police patrol at midnight noticed nothing, but at 2 am word was brought to the police by a woman that the building was in flames. On their arrival at the church the police found that the building was falling in and in a short time the building was completely gutted allowing no opportunity of saving any of the valuable church property: silver Communion vessels dating from the seventeenth century, and mural tablets belonging to the Keane family, which were all destroyed.”
Also featured in the brochure are details of Glenard House, built in 1882 an attached to St Mary’s Church and the Clare Abbey Communion Cup. The words Clare Abbey are engraved in the cup which is believed to have been from the 19th century. The engraving indicates it was in use in St Mary’s Church, which was located in the parish of Clare Abbey. It survived the fire by being held in a bank safe and is now held in St Columba’s Church.
Apart from the Glebe house, ‘Glenard’, the only parts of St Mary’s that survive are the gate-piers which form the entrance to the Rectory of St Columba’s Church in Ennis and the Protestant Parochial School in Clarecastle which is now a private house.
The initiative has been supported by the Department of Culture, Heritage and the Gaeltacht under the community strand of the Decade of Centenaries programme.