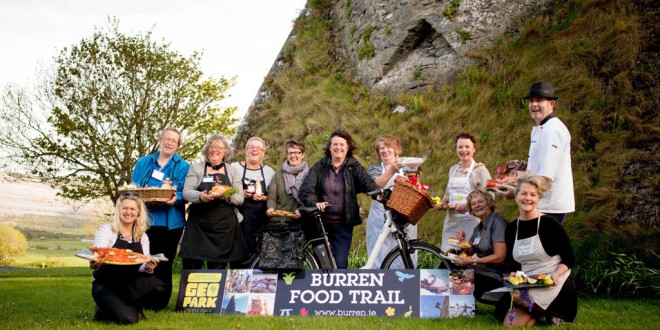 Clare Tourism has congratulated members of the Burren Food Trail after the sustainable tourism initiative was named winner of the 2015 European Destination of Excellence (EDEN) award.

The Burren Food Trail was one of four destinations shortlisted by Fáilte Ireland earlier this month in the prestigious EU-wide EDEN competition.

The theme of the competition, which was previously won by Loop Head, was ‘Tourism and Local Gastronomy’ and the winning destination was chosen following on-site assessments by a panel of expert adjudicators.

Martin Waldron, North Clare representative on the Clare Tourism Steering Group said the award win will help to promote and give official recognition to the “wide range of fantastic work” that is ongoing throughout the Burren through sustainable business practices.

Mr. Waldron, whose operates Self Catering Accommodation through Corofin-based Burren Escape, added: “As PRO of the Burren Ecotourism Network, I have witnessed at first hand the benefits for food operators and businesses in coming together to develop and promote the local sector. The EDEN judges who visited the Burren were very impressed by what they saw and heard, and they felt that the local food sector has taken a central role in the region’s tourism offering while concurrently sustaining the local environment.”

“The Burren is home to some of Ireland’s best known food product exporters such as The Burren Smokehouse, while there are many more producers who provide local hotels and restaurants, and local farmers markets with home grown, quality slow food produce. The Burren Food Trail is a wonderful platform for which the Region’s many quality local food producers and restaurants can be showcased to a wider domestic and international audience,” added Mr. Waldron.

The Burren Food Trail project will now receive free marketing supports from Fáilte Ireland including a professional photo shoot for the destination to be used for promotional purposes, and a grant of €5,000 for business development support initiatives. A formal EDEN award ceremony will take place in the Burren in July and the Burren Food Trail will also represent Ireland at a ceremony/exhibition in Brussels later this year