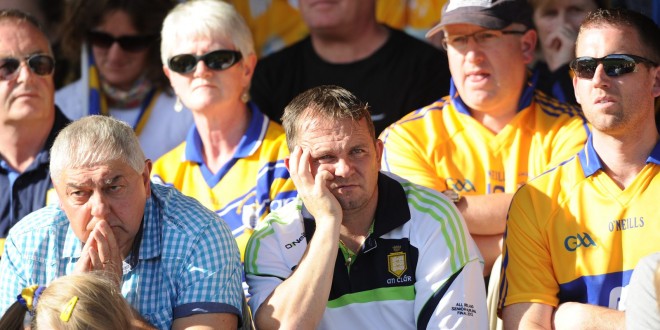 Clare senior manager Davy Fitzgerald in the stand before the All-Ireland U-21 hurling final at Thurles. Photograph by John Kelly

UNPRECEDENTED times for Clare hurling. A second successive All-Ireland under-21 title, and a third in five years, has given Clare fans reason for celebration but for the majority of the players the celebrations will be put ice for another few weeks.

On Sunday, its back to training for 14 of the squad, as they turn their thought to Saturday week’s senior final replay against Cork.
Clare dictated matters from beginning to end at Thurles, as Antrim were routed. It was a total mismatch. To their credit, however, the Ulster champions never gave up.

Apart from the opening five minutes, when the sides when players were settling in, Clare had their third All-Ireland under-21 title wrapped up midway through the opening half when they had a six point lead. Antrim were clearly struggling to keep with them.
Seven minutes from half time, the opening goal came from corner forward Davy O’Halloran and four minutes later his Éire Óg club-mate Shane O’Donnell brought Clare’s tally to 2-16. Seven players had shared in the champions’ tally at this stage and while Paudge Collins hadn’t got his name on the score sheet, he had created many of the scores and was causing serious problems for the Ulster champions.