Home » Breaking News » No evidence of babies buried in Kilrush 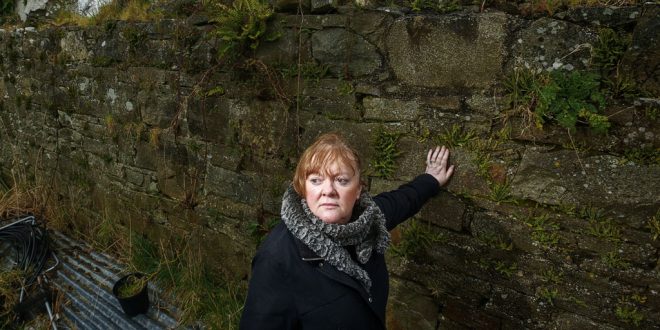 Local historian Rita Mc Carthy at the boundary wall of the old Kilrush Union Workhouse, which served as the county Clare Nursery from 1922 to 1932. Photograph by John Kelly.

No evidence of babies buried in Kilrush

KILRUSH historian Rita McCarthy, who investigated the operation of the County Clare Nursery on the Cooraclare road in the town, believes it is unlikely that any babies are buried on or close to the site.

It follows revelations of the discovery of human remains at the site of the Mother and Baby Home in Tuam, County Galway.

The nursery in Kilrush is one of the mother and baby homes nationwide that is part of the Mother and Baby Home Commission of Investigation, which was established on February 17, 2015 and is chaired by Judge Yvonne Murphy. The home in Kilrush was operated by Clare County Council from 1922-1932.

Ms McCarthy told The Clare Champion that she could not yet reveal details of her contribution to the report, which is likely to be published in 2018.

“I can’t talk about the specifics in that report because that is subject to the commission releasing it. But before that, I had done quite a bit of research for an MA I was doing on local government in Clare. That’s where I became interested in it,” she said, adding that she does not have evidence that babies from the nursery were buried in unmarked graves in Kilrush.

“I don’t know and I won’t speculate. I have heard people saying that there were graves but I don’t know. All the children were baptised. It is unlikely that anything like that would have happened. I have no knowledge that anything like that happened. There was a high death rate, there’s no doubt about that. I know more specifically but I can’t say it. I have looked at baptismal records and the census. The census show a high death rate.

“There would have been women there from Ennis, Ennistymon, Feakle, Lisdoonvarna, Kilrush and Spanish Point. Every parish in the county would have sent women there. Generally speaking, the women had to spend two years there and work in the hospital across the road,” she explained.
Ms McCarthy has found that while single, pregnant mothers were treated as criminals, the fathers of the children were not treated in the same manner.

“The majority were young, pregnant, unmarried women. There seems to be no mention of the men in any of this, or who the fathers were. In the main, the men were given a free pass in this. The women were ‘offenders’. They were seen as ‘fallen women’. It was very Victorian language, even though we were in the 20th century. The children weren’t valued and the women weren’t valued.
“Like most people, I never knew the place existed in Kilrush. It was very much a secret institution,” she continued.

Opened in 1922, at the time that the workhouses had closed, as soon as the Treaty was signed with the UK, the various county councils had to decide how they were going to run their administration areas and look after people in need.

“The ink was hardly dry on the Treaty when Clare County Council made a decision to close the workhouses. There were workhouses in Scariff, Ennistymon, Ennis and Kilrush. The people in them, who were referred to as ‘inmates’, were moved into Ennis. The workhouse in Ennis, which is the site of St Joseph’s Hosptial now, became the county home and everyone was moved in there. That left the other workhouses with staff unemployed and businesses with nobody to supply. Each of them got something and Kilrush became the County Clare Nursery,” Ms McCarthy outlined.

The home in Kilrush was closed by the council in March 1932, to save money.

“Clare County Council was quite happy to sub-contract the lives of the women and children to Roscrea, which we know was a horrendous place. If Tuam had been cheaper, they would have sent them there. It boiled down to cost. The only real objection to it was when the traders submitted a report saying that everything was taken from Kilrush.

“From the very beginning, the nursery in Kilrush was a disaster. It wasn’t fit for purpose. It hadn’t been fit for use as a workhouse and it certainly wasn’t fit to be used as a mother and baby home. There was no sanitary accommodation and no proper water supply. It was ran by Clare County Council and overseen by the government. There were nurses and nuns employed there and other staff. A sub-committee from the council oversaw the day-to-day management of it. The matron would submit a report to them,” she explained.

Ms McCarthy is hopeful that a memorial will be erected at the site, to remember the women and children who lived and died in horrific conditions in the building.

“I think it’s time to put a memorial somewhere at the site. Something to acknowledge the lives of the women and the children who spent a considerable amount of time there. They suffered greatly because of it,” she concluded.

Previous Rochestown’s experience too much for St. Caimins
Next Breen on trade visit to Texas