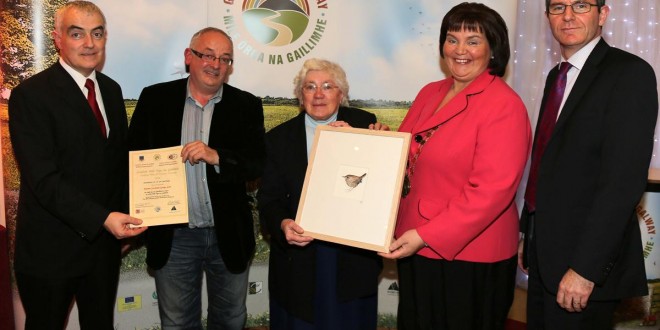 Gort was a winner of the Golden Mile competition run by Galway County Council and Galway Rural Development. The Gort Golden Mile begins in the townland of Ballynamantan and ends in Kinincha.

Sr de Lourdes Fahy and Adrian Feeney, collected the award, represented the Burren Lowlands Group. They received a certificate and a Natural Heritage Print designed by Sabine Springer. The Golden Mile award was for the Mile showing the Most Potential and was presented by Dr Christy Cunniffe.

According to Mr Feeney, what makes this particular mile stand out is its views.

“Views stretch across the countryside into Gort lowlands and across to the Sliabh Aughty Mountains. The mid section of the mile consists of a green road. Hedgerow birds are abundant all along the road. A beautiful thatched cottage (Hallinan’s house) can be seen on the roadside; this was the miller’s house in the olden days. A lot of work was done to remove the abundance of litter. The rest of the route into Gort is currently being cleaned up and the Burren Lowlands Group would like to appeal to the public to keep a vigilant eye out for illegal dumping. This is a beautiful road that can be utilised by all members of the community,” he said.

The road stretches from Kinincha to Ballynamantan and provides access to Coole Park.

“It is great to see all the voluntary effort and hard work that people living in these areas have put into making their mile more attractive. In addition to this they also provide us with valuable information about the riches of built, natural and cultural heritage that can be discovered on the mile. Information if not collected now will be lost to future generations,” said Councillor Hoade.