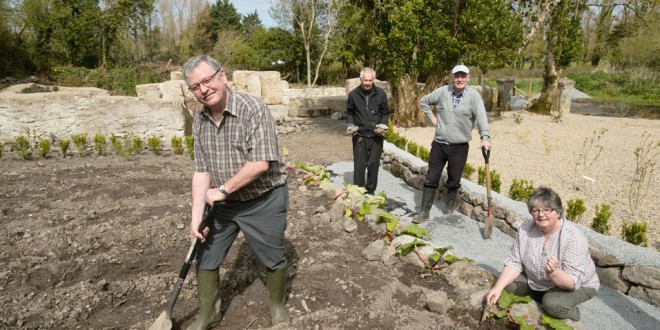 Digging in at Hasting’s Cottage

Hasting’s farmhouse is perhaps the most historic site in Shannon and work has started on improving its gardens, in the hopes of making it a more attractive place to visit.

Located in Illaunmanagh, Hasting’s Cottage is included on the 1840 Ordinance Survey Map of the area but may have been built long before then.

The map in question shows the cottage and outbuildings at the end of Slí na Mara, which was the only routeway into Tullyvarraga at that time.

During the War of Independence Brigadier General Lucas, a high ranking British officer, was taken captive and imprisoned there. He was guarded by Major General Michael Brennan, who subsequently led the East Clare Brigade of the IRA.

In recent months, there have been a number of historical discoveries in the area, including weapons that may have been used in the War of Independence.

Speaking about the works that have been taking place there of late, Tom Chambers of Dúchas na Sionna, said, “What we’re doing is restoring the garden there. It’s completely overgrown, with brambles, briars, you name it. What we’re doing is restoring it back to what a typical farmhouse garden would have been; to make it a living garden once again.”

The current works follow on from some improvements made some time ago, Tom added.

“We had managed to preserve what remained of Hastings Cottage a few years ago and had the official opening. The whole place still looked a bit like a derelict site, in a way, so we said we’d clean up the garden, try and get vegetables growing there, plant shrubs, maybe put seating and signage relating to the history of the site and bring it back to life again so people can go in and have a look around. It’d also be linked in with the proposed looped walk in the area along the banks of the Shannon.”

Tom says a lot of work will take place in the next number of weeks and quite a lot has been done already.

“This phase of the project probably won’t be finished until the end of May. We have Brendan Walsh, who is a landscape gardener and is very sympathetic to restoring the gardens of old properties, particularly old farmhouse cottage gardens. We have a vegetable plot and we had a lot of volunteers out there last Saturday. We planted a number of drills of potatoes and we sewed rhubarb. We’re putting in shrubs and things like gooseberry bushes as well; all things that would have been associated with old style gardens.

“We want to restore it as a living garden really and long term it’d be lovely if we could restore the farmhouse itself to its original status as a thatched cottage. Hopefully, we’ll get this stage of it done first and maybe get the county council behind us if there is future development of the site.”