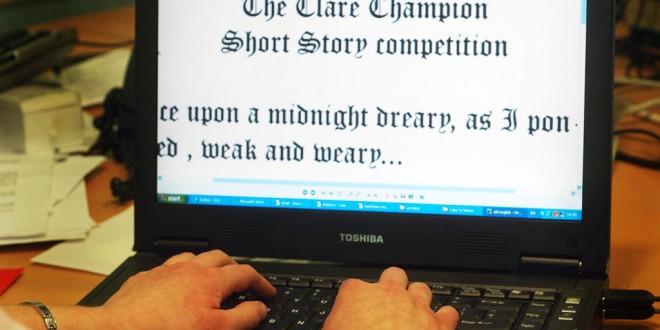 ENTRIES for The Clare Champion Short Story Competition 2016 are now being accepted.
Second-level students are invited to submit between 1,000 and 1,500 words on any subject of their choice, with Leaving Cert and Junior Cert categories for the young writers.

The first prize is €300, with €200 for the runner-up and €100 for third place in each category. There will also be a number of prizes for highly commended short stories.
Prospective entrants should submit a typed-only entry with their name, age, telephone number, school, year and English teacher’s name to Second Level Schools Short Story Competition Category (Leaving Cert or Junior Cert), The Clare Champion, Barrack Street, Ennis. The deadline is February 19, 2016.

Editor of The Clare Champion Austin Hobbs said the Short Story Competition has proven to be very popular over the years, with the students, schools and parents.

“It’s one of the most successful projects that we’ve ever undertaken. While we have a lot of sponsorship of sports organisations and Community Games, this is something that demonstrates our support for the arts and writing,” he says.

A number of St Joseph’s Secondary School students have been winners in the writing competition over the years and Ms Crawford says the students gained great confidence from their success.

“It’s a fantastic thing for them to have on their CV and creative writing is part of the curriculum,” she says.

Joe Coughlan, an English teacher at St Joseph’s Secondary School, believes the competition gives students confidence, while it is good practise and very beneficial for developing their creative-writing skills.

Mr Coughlan said generally essay writing for the Leaving Cert is practised in class, where pupils have a number of subject choices but he says it is beneficial for students to have the freedom to use their imagination.

“It’s brilliant for kids really and they’re not writing to a title like in the Leaving Cert, which is brilliant. It’s totally off their own bat and they’re totally free. You have more time to work on things like this in transition year a lot of the time.”

He says short-story writing is on the Junior Cert curriculum so they study short stories.
Mr Coughlan says the standard of short story and essay writing in St Joseph’s Secondary School is generally very high, year on year.

“Some kids can be brilliant at it and for more kids it’s not their forte. They could be more into writing a discussion essay or something but some kids just have a way of telling a story,” he says.

“I find kids are reading more and I’ll be sending in a few entries from the third years we have this year. You would let them all have a go and you might pick out three or four out of the class. They’re getting better at writing the stories.”

The West Clare teacher says The Clare Champion Short Story Competition is a fantastic way to boost young people’s confidence in terms of creative writing, while he says it is fantastic for the winners to see their stories in the newspaper.

“Last year one of our students, Brian Talty, got an A in honours English in the Leaving Cert and he came second last year in the short story competition. We’ve picked off a few prizes over the years,” he concludes.